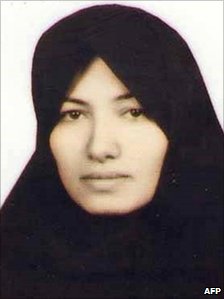 “I call on…Mahmoud Ahmadinejad to permit Brazil to grant asylum to this woman,” Mr Lula said at a campaign rally for his party’s presidential candidate.

“If she is causing problems there, we will welcome her here,” he added.

While Lula has been eager to make business deals with Iran, hosted Mahmoud Ahmadinejad last year and visited Iran last May (link in Portuguese), the Iranian regime turned a deaf ear to his offer:
Brazil’s Plea for Asylum for Iranian Facing Stoning Seems to Fail

While no Iranian government officials commented on the Brazilian president’s plea, Jahan News, an ultraconservative news service in Iran that is regarded as credibly reflecting the government’s thinking, said Sunday that it was a “clear interference in Iran’s domestic affairs.”

Rather than kill an innocent woman by stoning,

Sakineh Ashtiani, 43, might not be stoned to death because Iran’s judiciary was reviewing the lower court’s sentence. She could be hanged instead.

Meanwhile, her lawyer has gone into hiding after his wife and brother-in-law were arrested without a reason.