Since the average sized bathtub is too short, I love a really great shower, and would absolutely love to have one of these installed in the house. Imagine 12 lovely gallons of water a minute. Alas, the government says “no”: 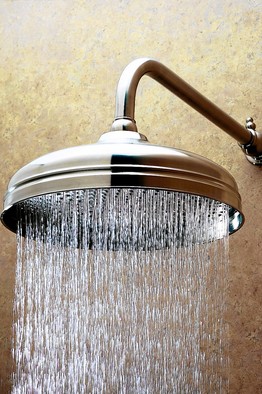 Federal maximum for a ’showerhead’: 2.5 gallons per minute, at 80 pounds per square inch

Shower Rose, a discontinued device: 12 gallons per minute, at 55 pounds a square inch

Compared to the Shower Rose, the shower complying with the Federal maximum is a Water Pik.

A Water Fight Over Luxury Showers

Regulators are going after some of the luxury shower fixtures that took off in the housing boom. Many have multiple nozzles, cost thousands of dollars and emit as many as 12 gallons of water a minute. In May, the DOE stunned the plumbing-products industry when it said it would adopt a strict definition of the term “showerhead” in enforcing standards that have been on the books—but largely unenforced—for nearly 20 years.

The showdown is a challenge to President Barack Obama and his energy secretary, Steven Chu, as they try to cajole—or compel—Americans to use water and energy more efficiently.

Yes siree, Barack Obama, the guy who flew his dog on a separate plane to a weekend vacation in Maine, doesn’t want you to luxuriate in a shower – he wants to force you to use energy more efficiently.

Because the government can, and will, regulate you out of the comforts of your own bathroom. As I said last October,

I predict the start of a black market on non-compliant showerheads.