After months of political wrestling with the Democrat-controlled legislature, Mr Christie has emerged with a budget very close to the one he proposed in March. Worryingly, the $29.4 billion spending bill contains a debt-restructuring plan that means state workers’ pension funds will be neglected for a year. According to the Mercatus Centre at George Mason University, one of the state’s five pension funds could run out of assets to pay benefits by 2013. The other funds face the same problem by 2019.

Nonetheless, the cuts are deep—$820m from school aid and nearly half a billion from aid to cities. School aid is usually considered untouchable, but Mr Christie appeared to chop without blinking. Some wonder if the cuts are sustainable if the economy does not bounce back as predicted. Others worry that they will hurt the vulnerable, but Mr Christie promises that the pain will pay off in the long run.

Next on his agenda was property-tax reform. New Jersey has the highest property taxes in the country; they have increased by more than 70% over the past decade, and now the average annual property-tax bill for a New Jersey family stands at $7,281. Two days after passing the bipartisan budget Mr Christie ordered the state legislature back to Trenton, the state capital, for a special session over the July 4th holiday weekend to cut property taxes down to size.

At first Mr Christie demanded a 2.5% tax cap. Three days later, flanked by politicians from both parties, he announced a bipartisan consensus for an even stronger 2% cap, which he signed into law on July 13th. This compromise was described by the Star-Ledger, a prominent New Jersey newspaper, as the governor’s finest moment. Ingrid Reed, a New Jersey policy analyst, saw it as “a case-study of how compromise works in a political environment”.

As the fiscally hawkish Republican governor of a Democratic state, Mr Christie has taken on a notoriously cranky legislature and has stared down the powerful teachers’ union. He has even refused to reappoint a judge to New Jersey’s activist Supreme Court. Little wonder that the governor, who is entertainingly feisty and frugal, is grabbing national attention, particularly from conservative corners. His blunt, combative, decisive yet funny style is a mixture of Rudy Giuliani, New York City’s former mayor, and Eliot Spitzer, New York’s former steam-rolling governor.

Most important, Mr Christie has discovered that flexing political muscle is not always the answer. With a 33-bill “tool-kit” to cut local spending on his summer agenda, he will find shrewd compromising, as on the property tax, far more appealing than a paralytic tug-of-war. He need only look across the Hudson River to New York to see how well that works.

Christie had to start somewhere. The question is, can he continue to steer the state in the right fiscal tract?

And yes, he got to meet the Queen, too, 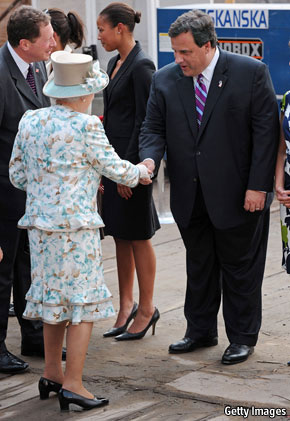