First there was the question, “Is Iran Building Nukes in Venezuela?” 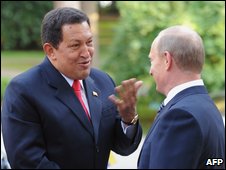 Now we have this bit of news, Venezuela to get Russian missiles

Venezuela’s President Hugo Chavez has announced that the country will soon take delivery of Russian missiles with a range of 300km (185 miles).

Returning from a 10-day tour of Africa, Asia and Europe, including Russia, Mr Chavez is also planning to buy Russian T-72 and T-90.

“Soon some little rockets are going to be arriving… and they don’t fail,” he announced at the presidential palace.

But he denied they would be used for offensive purposes.

Of course, what do you expect?

“We are not going to attack anybody, these are just defence tools, because we are going to defend our country from any threat, wherever it may come from,” the president said.

Any threat, real or imagined, that is?

Hugo didn’t specify how many missiles he’s buying from Russia.

In other shopping news, Evo Morales is buying a new presidential jet from Russia. I wonder if Hugo gets a broker’s fee on that transaction.


———————————
Chávez’s trip wasn’t all a bed of guns and roses, he was resoundingly booed when he arrived at a bookstore in Madrid:

The crowd “welcomed” him with cries of “Dictator!”, “friend of Ahmadinejad”, and “corrupt!”