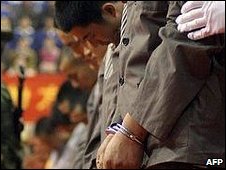 China is trying to move away from the use of executed prisoners as the major source of organs for transplants.

According to the China Daily newspaper, executed prisoners currently provide two-thirds of all transplant organs.

The government is now launching a voluntary donation scheme, which it hopes will also curb the illegal trafficking in organs.

This is a huge admission,

Human rights groups have often criticised China for its lack of transparency over organ donation, but critics have focused particular concern on the use of body parts from executed prisoners.

In a rare admission of the extent to which this takes place, China Daily – citing unnamed experts – said on Wednesday that more than 65% of organ donations come from death row prisoners.

Back when Lost Budgie was blogging, the allegations were that death-row inmates had been tested for compatibility prior to sentencing, as described in 2006 this article (emphasis added),

Li was two cases short toward the end of the year, so he asked his subordinates who were responsible for finding kidneys to contact the local courts, requesting advanced death sentencing of two convicts whose kidneys were found to be a match for the patients. The courts cooperated and the two persons were executed. Thus Li got the kidneys he wanted and fulfilled the task of completing 72 surgeries within one year. He was rewarded the bonus, became quite famous, and started to do more kidney transplant surgeries.

At the time, for each dead body provided, the hospital would pay 3000 yuan (approximately US$370) to the courts, which in effect came from the patients’ pockets. Many details had to be addressed to ensure the success of the kidney transplant. The executioners were ordered to raise their guns so that bullets would not damage the brainstem, which controls breathing and heartbeat. This would ensure that while the kidney stayed at normal body temperature it would also have sufficient blood supply, because the kidney is most sensitive to blood pressure changes- this would help with performing a successful operation. Executioners were also asked not to use exploding bullets to avoid a speedy loss of blood. Otherwise, the dead body would lose all its blood before the kidney was removed, which would decrease the transplant’s success rate.

As the BBC article says, “China executes more people than any other nation.”