I was reading the Washington Examiner’s editorial when I came across this statement:

So, it is nothing less than astonishing that President Obama today welcomes Zelaya to the White House.

The White House schedule doesn’t show any appointment for Zelaya’s visit, and I couldn’t find any other articles confirming it. For now at least, I’ll assume it’s a rumor; time will tell.

He is scheduled to be in Washington today:

He will surely be wearing his hat. 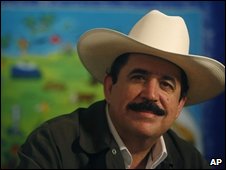 Zelaya’s been criticizing the US

for not doing enough, in his view, to condemn the government which replaced him.

He’s also not happy that Hillary has stopped using the term “coup” to describe his removal from power by the military last month.

White House or not, Zelaya has plans: Zelaya dice que “incursionará” en las montañas entre Honduras y Nicaragua (Zelaya will “make an incursion” in the mountains between Honduras and Nicaragua). He didn’t specify the purpose of his “incursions”, nor the location or the timing, but apparently he’s set up camp by the border… when he’s not flying in private jets all over the place, that is.

Update
This AP article, Time may be running out for ousted Honduran leader, has more details on the encampments by the border:

Many of those who did make it to Nicaragua wondered how long they could hold out away from their work and families, waiting for Zelaya to come up with a plan. Zelaya has vowed to remain on the border for at least a week, but hasn’t announced any concrete strategy since he walked a few meters into Honduras and then retreated Friday.

The crowd, housed in two shelters in Ocotal, spent Monday in disarray. They boarded buses for a drive to the frontier line, only to turn back when they realized Zelaya didn’t plan to join them. The ousted president showed up at one of the camps to address his supporters, only to find they had left for the border.

But hot meals arrived in the afternoon as Zelaya gave supporters an hours-long pep-talk, and a tractor trailer delivered hundreds of floor mattresses Monday evening for Hondurans sleeping at a municipal gymnasium.

“We’re waiting for Mel Zelaya to give the order, and we’ll go with him,” said Tomas Lopez, 57, an athletics teacher who traveled 375 miles (600 kilometers) to Nicaragua, leaving his family in Honduras. “I’m the head of the family, and they depend on me. We have food here and a place to sleep, but the problem is our children. Who is going to support them?”

The interim government that ousted Zelaya said Monday it had seized a series of what appear to be receipts from a key Zelaya organizer, indicating payments of between $3,000 and $20,000 to several protest leaders. None of the Zelaya supporters were immediately available to comment on the alleged payments or what they were for.

The Honduran government claims that the “key Zelaya organizer” was getting FARC money.

The State Department says it has revoked the diplomatic visas for four Honduran officials working in its interim government.

The announcement comes as the United States has been pressing for Honduras to allow the return of exiled President Manuel Zelaya.

State Department spokesman Ian Kelly did not specify Tuesday the names of the four officials, who he said are not in the United States. Kelly said that the department is reviewing the visas of all members of the interim government.

He said the revocations was in keeping with the U.S. policy of not recognizing the interim government.

I’m trying to get more (verified) information on who the visas belong to.

Zelaya wrote to Obama urging him to impose sanctions directly against the coup leaders and members of Micheletti’s government, including the cancellation of their U.S. visas and a ban on their bank transactions.

This is an outrage.

Prior posts on Zelaya here.