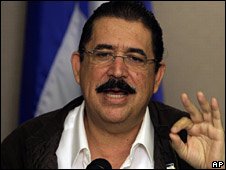 1PM: Just saw this in the news feed:
Zelaya said to return to Honduras ‘in hours’

Chavez, an ally of the president who was toppled in a June 28 coup, spoke as Costa Rica’s president prepared to host weekend talks with the rival sides in the standoff — the worst political crisis in Central America since the Cold War.

”Zelaya said that in the coming hours he’ll enter Honduras. We’re behind him, we have to support him,” the leftist Venezuelan leader told reporters outside the presidential palace in Bolivia where he was meeting President Evo Morales.

There was no immediate confirmation of the plans by Zelaya, who is currently in Nicaragua, which borders Honduras.

”This is a country where almost all the roads are blocked, the country’s paralyzed, it’s an ungovernable country,” Chavez added.

The BBC expands on the inflammatory rhetoric coming from the Chavez/Zelaya quarters:

The foreign minister in the deposed government, Patricia Rodas, said Mr Zelaya was returning to wage a “final battle” against those who ousted him.

Don’t miss the IBD editorial, Behind Hugo’s Harassment Of Honduras

I’ll be updating this post later in the day.

6:30PM
Libertad Digital reports that the Honduran government found and seized from the president’s residence 45 computers that had the pre-programmed results for the referendum that Zelaya intended to carry about the day he was expelled from the country. (My translation: if you use it please credit me and link to this post)

One of the prosecutors involved with the case showed the media voting results from table #345 at the Instituto Técnico Luis Bográn, in Tegucigalpa, showing a total of 550 counted ballots, with 450 votes in favor of Zelaya’s proposal, 30 against, 20 blank and 30 null.

The raid took place on the third floor of the building annex to the Ministry of the President, which had been leased to the ex-Minister of the Interior, Enrique Flores Lanza.

Spain’s ABC is also reporting on the story.

Chavez gave another press conference in La Paz, where he accused Micheletti of “making Al Capone look like a newborn baby by comparison”. Chavez refers to Micheletti as Goriletti. He also mentioned the roadblocks, and said that Zelaya’s willing to die trying to re-enter Honduras “by land or by sea.” The Archbishop of Honduras has blasted Zelaya and Chavez both, and is receiving daily death threats.

Here in the US Congressman Mike Pence addressed the Hispanic Congressional Leadership Institute on Honduras:

“These events come at a time of growing authoritarian presence in the Western Hemisphere. Hugo Chavez has successfully amended Venezuela’s constitution, securing power indefinitely. A former guerilla party has risen to power in El Salvador. Meanwhile, Hondurans have struggled for years to build the foundation for a stable democracy and the United States has been, and must remain, their steady ally in that effort.

“I am encouraged by Secretary Hillary Clinton’s recent statements that suggest the Administration may be coming back around to freedom’s defense. But it’s time, as President Kennedy said, ‘to convert our good words into good deeds.’

“We can start by reestablishing our financial support to Honduras and our recognition of their diplomats in Washington. The President must also answer a congressional request for the legal justification of his Administration’s actions in light of the fact no military coup took place.

“Next, Congress must pass free and fair trade agreements with Colombia and Panama. Such an act would send a strong message that the United States is committed to its Latin American allies. We must always stand by our friends when tyranny spreads, especially when it is in our own backyard.

The State Department apparently has made a 180o degree turnaround from the Obama administration’s prior stance that Zelaya return to power immediately: US opposed to Zelaya’s Honduras return attempt

The United States is opposed to any attempted return to Honduras of deposed leader Manuel Zelaya, fearing it could jeopardize reconciliation talks hosted by Costa Rican President Oscar Arias.

“We don’t want people to take steps that in any way conflict or don’t contribute positively to the Arias mediation efforts,” said State Department spokesman Robert Wood.
…
He declined to say whether the United States had tried to convince Zelaya to abandon his return attempt, but a department official who spoke on condition of anonymity said the US position had been made clear to him.

Describing the return plan as “not helpful,” the official said Zelaya “is well aware of our position on this.

QUESTION: On a different area, to Honduras, reports of Zelaya’s return this afternoon, a deal – can you just bring us up-to-date and tell us what the U.S. knows?

MR. WOOD: Well, I don’t really have much of an update. I know that the Arias mediation discussions are going to take place tomorrow. And our goal continues to be the restoration of constitutional and democratic order in Honduras, and that’s our top priority. We want to see that happen.

To address some of the issues that many of you have raised over the last several weeks about what comes next, what’s going to happen, we have to give this process some time to play out. President Arias is an experienced negotiator, a Nobel laureate. He’s got great expertise in this area. We would encourage both sides to commit themselves to working through this process so that we can get back to the democratic and constitutional order that we all want to see restored in Honduras. But I don’t have anything much beyond that.

MR. WOOD: Well, it’s not for me to say how we see his role. President Chavez is going to make decisions and take actions that he wants to take. What we’re saying, and I think other — our other partners in the hemisphere don’t want to see actions that are in any way going to inflame tensions in the region, tensions which are already pretty high. And we continue to encourage all the players to engage with President Arias so that we can get back to that democratic and constitutional order that I just spoke of.

QUESTION: But do you think its helpful having him go back there sort of this afternoon and –

MR. WOOD: Look, I think it would be helpful for all players to support the Arias process. I think that’s about the best way I can characterize it.

Nina and then Jill.

QUESTION: Is it correct that Mr. Micheletti is willing to step aside for a third party?

MR. WOOD: I don’t know. You’ll have to go to Mr. Micheletti to find out exactly what – I’ve seen reports to that extent. But I’d have to refer you to him as to what his plans are.

QUESTION: And then just – you know, the constant message from the United States is that we have to give this time and everybody should cooperate, et cetera. But it looks as if President Zelaya is the one who’s really pushing it. He is the one who flies down there, continues to say that he’ll accept nothing but returning. He is the one who seems to be emerging as the least stable element in this. Isn’t that correct?

MR. WOOD: Well, the best thing I can tell you about this, Jill, is that clearly, tensions are very high. And what we’re trying to do is to get people to really focus on how we can bring about that peaceful – that return to democratic and constitutional order. We believe the Arias mediation process is the best way to do this. And taking steps, by any other players, to increase tensions in the region are not useful.

But what’s important is that we eventually get to that point of a return to that democratic and constitutional order. And look, the Arias peace talks haven’t been – I mean, this is recent. We need to give it some time. As I said, he’s committed to this process, we are, others in the hemisphere are. We need to allow it to work. We need to allow it to go forward. And so we’re going to continue to encourage the parties to support this process, because we think it’s the best way to get back to where we want to get to.

QUESTION: Following on that, has the U.S. Government specifically asked or urged President Zelaya not to try to make another contested attempt to enter Honduras?

MR. WOOD: I don’t want to get into discussions we may or may not have had with President Zelaya on a host of issues. Let us just say that we don’t – as I had said earlier, we don’t want people to take steps that in any way conflict or don’t contribute positively to the Arias mediation efforts.

QUESTION: So then would his return not contribute positively to it? Is that what you’re saying?

MR. WOOD: I don’t have anything more to add to it than I’ve given you, Sue.

QUESTION: Because it sounds to me like you’re saying that that would really inflame tensions and would not be useful for the mediation process starting tomorrow.

MR. WOOD: Well, the mediation process has been ongoing for just a short period of time.

MR. WOOD: And we’re very committed to it and others in the hemisphere are as well. And we just don’t want to see actions that in any way don’t contribute positively to that effort.

QUESTION: Such as his early return without having gone through the —

MR. WOOD: I don’t have anything to add on that now.

QUESTION: And how does the U.S. interpret the actions by Mr. Chavez? Is he being – trying to be helpful or is he fomenting revolution?

QUESTION: You do it all the time.

MR. WOOD: You didn’t let me finish. I was going to finish. I can’t possibly tell you what the motivations are from President Chavez.

QUESTION: What are your concerns? Maybe I should put it that way, as far —

MR. WOOD: Well, our concerns have been very clear all along, and I’ve just gone over them again and again, about the need to support the Arias efforts to try to get back to that constitutional order. President Chavez – I’d refer you to him for his motivation and reasoning behind the steps that he and his government take.

What I think we all want to see is a return to that constitutional and democratic order. And we believe – the United States believes, and we believe that others in the region feel that way as well, that we need to support the Arias mediation effort because it’s the best way to go forward.

QUESTION: Has Secretary Clinton or anyone else called Mr. Zelaya about this new plan he has to go back? I mean, is it —

MR. WOOD: I’m not aware that the Secretary has spoken to President Zelaya. I don’t know if Tom Shannon has or not.

MR. WOOD: I’m not aware. But we’re in contact with representatives of the president and, from time to time, the president himself, so – but I don’t know if there’s been a conversation recently on what you just referred to.

QUESTION: Like today, you don’t know whether anyone has sent him a Blackberry note, “Don’t go?”

MR. WOOD: Well, Blackberry notes, that’s hard for me to say. But I’m not aware of any conversations today by senior officials.