In the never-ending supply of eccentricity emanating from Hugo Chávez, now he’s banning soda, and at first glance it looks like he’s doing it just for the heck of it – but he isn’t: 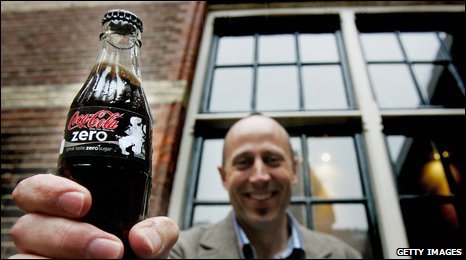 Venezuela has banned the sale of the calorie-free Coke Zero, calling it harmful to people’s well-being.

“The product should be withdrawn from circulation to preserve the health of Venezuelans,” said Health Minister Jesus Mantilla.

Mr Mantilla did not say what the specific problem with Coke Zero was.

Coca-Cola said it would stop production of the drink in the country, but also added that Coke Zero contained no harmful products.

The Beeb then asks,

Well, whadda think? Coca Cola has long been used as a symbol of American imperialism by Marxists all over the world, and I have been reading and hearing anti-Coca Cola propaganda all my life. Doesn’t matter to them that many Coca Cola bottlers are locally-owned enterprises.

Noticias 24 reports that Coca-Cola Femsa, the world’s second-largest Coca Cola bottler, has been having problems with the Chávez regime for a while (my translation):

The company suffered through an extended and costly strike by former workers, which was solved in late 2008 after paralyzing its operations in the country, and also had a conflict with Chávez, who asked them to vacate some land the company owned in Caracas.

All this comes in the middle of a huge nationalization drive that involves the control of food sources in the country.

Houston-based Exterran rented the 33,000 barrel-a-day pumping platform to Venezuela at an “onerous” rate, PDVSA, as the state oil company is known, said today in an e-mailed statement. Having the platform in foreign hands limited PDVSA’s flexibility to increase production, the Venezuelan company said.

PDVSA, as the company is known, yesterday seized 19 Exterran gas compression facilities and offices under a month- old law meant to keep private companies from being able to cut Venezuelan oil output in case of conflict. Exterran said May 1 it may write off $97 million related to its Venezuela assets.

As you can see, it’s not just a whim.

Again,
It’s all about the anti-American propaganda. Coke Zero is absolutely harmless, and I for one will continue to enjoy it.

Today’s podcast at 11AM Eastern will deal with this.