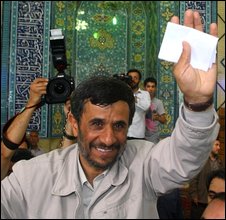 The BBC states that Iran’s Interior Ministry declared Ahmadinejad the winner with 63% in yesterday’s election.

However, there are a lot of questions. Via Real Clear World, Stratfor reported that

Prior to the announcement of the results, Mousavi held a press conference in which he said he was the winner of the election. The opposition camp is greatly concerned about fraud, and STRATFOR has been told that Mousavi has vowed to resist any fraud, even if it entails taking to the streets. This means there is considerable risk of unrest should Ahmadinejad emerge as the winner. But so far there is no evidence that the government is mobilizing security forces to deal with any such eventuality.

Polls remained open in Iran three hours after the end of official voting.

Michael Totten compares the situation to A heaving volcano.

No decisiveness coming from the White House on the subject of the election. Betsy asks Is Obama really this clueless about Iran?

The only thing clear is that the mullahs aren’t ready to hand Ahmadinejad his walking papers.