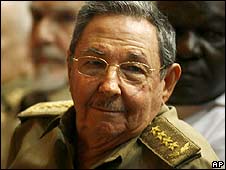 The Beeb is reporting ‘No progress’ at EU-Cuba meeting

The European Union has said it made no headway with Cuba on its human rights record, following talks in Brussels.

The comments were made by Czech Foreign Minister Jan Kohout, who represented the EU at the meeting.

The EU lifted sanctions on Cuba in 2008 to encourage democratic reforms, but decided to review the move annually.

Yesterday Mary Anastasia O’Grady was reminding us that Cuba doesn’t belong in the OAS democratic club.

Fidel Castro mocked the idea of joining the OAS.

Keep that in mind if you ever think that doing away with the US embargo will bring about any kind of democratic change in Cuba.