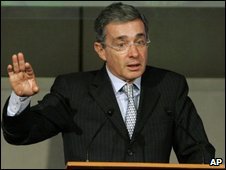 Colombia’s senate has overwhelmingly backed a referendum on allowing President Alvaro Uribe to stand for an unprecedented third term in 2010.

A vote in favour would amend the constitution to allow the same right to any president.

Before it can be held, the country’s Constitutional Court needs to approve the referendum.

All podcasts are archived for your listening convenience. Listen live and join in the new video chat, too!

UPDATE
El Nuevo Herald points out that before the referendum goes to the Constitutional Court, the two versions approved by the two chambers must be reconciled in a final version.

The request for the referendum was backed by a petition with five million signatures.