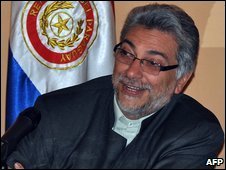 On Monday I linked to He’s definitely not the Messiah, he’s a very naughty boy, about Paraguayan President Fernando Lugo‘s admission that he fathered a child while he was still Bishop.

The mother of that baby was a girl in her twenties, Viviana Carrillo.

Now there’s another woman in her twenties, Benigna Leguizamón coming forward with another child who is now six years old, claiming that Lugo is the father. Lugo requested a DNA test to be done through a private lab, however, Benigna insists that the testing be done through the court system – which is a positive sign that the courts are independent of the presidency.

A Roman Catholic bishop said Tuesday that before the president resigned from his church leadership position in 2004, at least two women in his parish wrote to a Vatican official that he had fathered their children. President Fernando Lugo, left, was hit with two paternity claims this month, and he has acknowledged fathering a boy born in May 2007, whose mother brought one of the claims this month. Bishop Rogelio Livieres said Tuesday that when confronted with the complaints in 2004, Mr. Lugo, then a bishop, said it was “possible” that their children were his. Bishop Livieres said the church allowed Mr. Lugo to resign without making the complaints public, easing his bid for the presidency. The Paraguayan bishops’ conference wrote in a statement that it had never received “formal written complaints” from women about Mr. Lugo, and that it rejected the claim that the church covered up immoral conduct.

In a statement, the president’s office said he was prepared to act within the bounds of truth, and that he had established a special team to deal with the legal cases that might emerge around this subject.