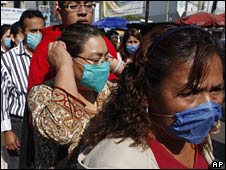 Mexican officials, scrambling to control a swine flu outbreak that has killed as many as 61 people and infected possibly hundreds more in recent weeks, closed museums and shuttered schools for millions of students in and around the capital on Friday, and urged people with flu symptoms to stay home from work.
…
The new strain contains gene sequences from North American and Eurasian swine flus, North American bird flu and North American human flu, said the Centers for Disease Control and Prevention. A similar virus has been found in the American Southwest, where officials have reported eight nonfatal cases.

Most of Mexico’s dead were young, healthy adults, and none were over 60 or under 3 years old, the World Health Organization said. That alarms health officials because seasonal flus cause most of their deaths among infants and bedridden elderly people, but pandemic flus — like the 1918 Spanish flu, and the 1957 and 1968 pandemics — often strike young, healthy people the hardest.

Because of the situation, the World Health Organization planned to consider raising the world pandemic flu alert to 4 from 3. Such a high level of alert — meaning that sustained human-to-human transmission of a new virus has been detected — has not been reached in recent years, even with the H5N1 avian flu circulating in Asia and Egypt, and would “really raise the hackles of everyone around the world,” said Dr. Robert G. Webster, a flu virus expert at St. Jude Children’s Research Hospital in Memphis.

And here in the US,

There is no point in trying to use containment measures in the United States, he said, because the swine flu virus has already appeared from San Antonio to San Diego, without any obvious connections among cases. Containment measures usually work only when a disease is confined to a small area, he said.

Have a nice weekend.

Post updated to show photo and link to BBC article.