The world’s gone mad all at once, and now this: 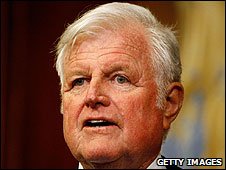 Ted Kennedy to be knighted

Ted Kennedy, one of the leading members of the family dynasty that dominated American politics in the final decades of the last century, is to receive an honorary knighthood.

Gordon Brown will announce the award today when he becomes the fifth British Prime Minister to give a speech to both Houses of Congress.

we owe a great debt to the life and courage of, Senator Edward Kennedy,” Mr. Brown said.

Life and courage are not two words one should mix when talking about Ted, Gordon.

(* Only British subjects are called “Sir”; everyone else gets the handle “K.B.E.,” for “Knight of the British Empire,” instead.)