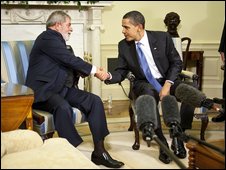 1:05 Lula in turn, starts by stressing the importance of trade between the countries. He goes down the list:

Question on the economic crisis and China’s debt holdings:
Obama “the stability of our economic system and our political system is extraordinary”
Lula: “The worse the situation. the worse the investment gets on developing countries. This is the problem we’re facing. Brazil is the least affected country but we also have the possibility to get out of the crisis…But the fact is that money has vanished and if we don’t make credit supply flow again, we’ll be hurting.”

Question in Portuguese on energy policy:
Brazilians don’t understand how a clean fuel can not reach US markets because of US tarriffs [which amount to 54 cents a gallon but I need to check that]
Obama: “We have a lot to learn from Brazil on clean energy development, change ideas and technology. The issue of Brazilian ethanol has been a source of tension; it’s not going to change overnight…over time this source of tension can get resolved.”
Lula 1:15PM: “This is the 1st meeting that we’ve had. My answer is your question: I can understand the concern with carbon emissions and climate change. Tony Blair, Sarkozy, former Pres. Bush, have all discussed this. Slowly the countries will be convinced and slowly other countries will join the biofuel effort. I have talked to President Obama and things will move forward as people start changing. Thank God that Brazil has had for years control of this technology, and I’ll show Pres. Obama a flex-fuel vehicle we have developed.”
Obama then says we have a flex fuel vehicle but not the right gas station.

1:20PM Question on g-20:
Obama goes into a totally defensive answer questioning the reporter’s sources and then goes on to talk about having an international body to account for amount of stimulus every country is doing so governments can keep track. An absurd answer if there ever was one. Then “we’re going to make sure that the systemic reasons of this crisis won’t happen again.”
I hope Obama did not point to Lula when he mentioned “very poor countries.”
Lula: “We presidents all talk too much.” Whoot! “We can not afford to go to [the G20] looking for someone to blame. We need to find the answers. We must have a special credit supply to the poorest countries and we also need to strenghten international institutions like the IMF, World Bank. We’re on a large ship, and it’s leaking. Two key words: re establish and restore credit in the world, re establish and restore confidence. We must have confidence in democracy. This crisis is an extraordinary opportunity to prove the goals that elected us: that we are capable to deal with major issues….The bottom line is that we need is to create jobs, to create demand and consumption, and to generate development, so we’re very optimistic. We have to make joint decisions.”

1:23PM Question in Portuguese on dangers of protectionism and will the US purchase Brazilian goods.
Obama: Will have cabinet member check on that. “The US needs to recognize the dangers of a trade war. It’s important to understand that US businesses will benefit from our exports… Our goal is to at least not go backwards. The “Buy American” provision will not violate WTO rules. It may be difficult to finalize a host of trade deals in a crisis like this…I’m optimistic we’ll find a way. Job growth, income growth, won’t build a fence across countries.”
Lula: “Why didn’t we manage to close the [free trade] deal if there was a minor issue in the way? I believe it was because there was an election that got in the way. Europe and the US almost managed to get market access, but two issues, 1 in India and one in the US, got in the way. Now on the crisis, we might be able to relieve the developing world in this crisis. The US and Brazil trade $53 billion… it is clear, for the size of the 2 countries we don’t have much trade flow. What is the problem? What happens each country wants to sell, and foreign trade is a two-way street, and we need to strengthen this idea because protectionism will aggravate the economic crisis…. This is much more than a practical issue. I hope the US and Brazil can mature their thinking ahead of the G20 so we can present a joint solution. I’m very optimistic.”
Obama “I’m very optimistic and I hope to see him in Brazil.” (no specific date for that) Hopes to go to the beaches in Rio.

The impression is that Lula is the pro and Obama the amateur.
Or, as my son, who was also watching said, “Lula cleaned Obama’s clock when it comes to the quality of the answers.”

Lula was focused and laid out the agenda: strong binds between the two countries, free trade, doing away with tariffs particularly on biofuels, job creation, and easing the credit crisis.
Obama just went along for the ride.

I’ll add a photo once one is available.

UPDATE
Welcome, Instapundit readers. You might want to check out this post on why Brazil is a key country.

Update 2
BBC photo added, and their article is titled, Lula warns US about protectionism
Ponder that a moment, folks. A socialist warning an American president against protectionism.