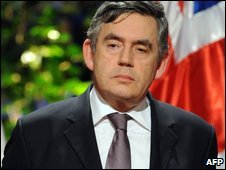 The DVDs with the trouser-in-socks moment; the Daniel Hannan speech at the EU Parliament; Lula’s spicy “white people with blue eyes” comment; all in Gordon Brown’s tour in preparation to the upcoming G20.

And now this (h/t the Baron):
Chile leader to Brown – we saved in the good times

Gordon Brown was embarrassed for the second time in as many days on his tour of South America today as his Chilean host explained how the country was able to protect is economy because it had saved cash in case of a downturn.

In words that could have been scripted by David Cameron, Chile’s president, Michelle Bachelet, said the country was in a position to fund further tax cuts if necessary.

“I would say that because of the decisions we took during the good times, we were able to save some money for the bad times. And I would say that today that policy is producing results,” he said.

President Bachelet was speaking at a joint press conference with Mr Brown on the last leg of his six-day world tour ahead of next week’s G20 summit in London which started with a call for the “biggest fiscal stimulus the world has ever seen.”

But the Prime Minister had to signal a retreat from a further Budget giveaway in the UK after the Bank of England voiced concern over Britain’s record debt.

Brown’s heading to Argentina next. At least Brown and Fernandez agreed ahead of time that sovereignty over the Falklands Islands will not be up for discussion when Gordon Brown holds talks with Argentine President Cristina Fernandez. Let’s hope Fernandez sticks to that agreement.

UPDATE
Commenter Sheila adds a YouTube of Brown being castigated by yet another Brit,