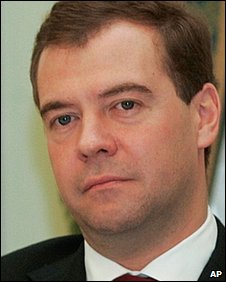 Mr Medvedev said the primary task would be to “increase the combat readiness of [Russia’s] forces, first of all our strategic nuclear forces“. Now, as the only Bush Cabinet member to remain under President Obama, Gates is preparing the most far-reaching changes in the Pentagon’s weapons portfolio since the end of the Cold War, according to aides.

Two defense officials who were not authorized to speak publicly said Gates will announce up to a half-dozen major weapons cancellations later this month. Candidates include a new Navy destroyer, the Air Force’s F-22 fighter jet, and Army ground-combat vehicles, the offi cials said.

More cuts are planned for later this year after a review that could lead to reductions in programs such as aircraft carriers and nuclear arms, the officials said.