After blowing it on the NAFTA truckers’ issue, Hillary’s now in Mexico. 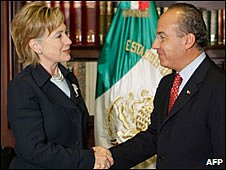 Secretary of State Hillary Rodham Clinton said Wednesday that America’s “insatiable” demand for illegal drugs and its inability to stop weapons from being smuggled into Mexico are fueling an alarming spike in violence along the U.S.-Mexican border.

Clinton said the United States shares responsibility with Mexico for dealing with the violence and that the Obama administration will work with Mexican authorities to improve security on both sides of the border.

President Barack Obama himself said Tuesday that he wanted the U.S. to do more to prevent guns and cash from illicit drug sales from flowing across the border into Mexico. But Clinton’s remarks appeared more forceful in recognizing the U.S. share of the blame. In the past, particularly under the Bush administration, Mexican official have complained that Washington never acknowledged the extent that the U.S. demand for drugs and weapons smuggling fuels the violence.

“I feel very strongly we have a co-responsibility,” Clinton told reporters accompanying her to Mexico City a day after the Obama administration said it would send more money, technology and manpower to secure the Southwestern frontier and help Mexico battle the cartels.

“Our insatiable demand for illegal drugs fuels the drug trade,” she said. “Our inability to prevent weapons from being illegally smuggled across the border to arm these criminals causes the deaths of police officers, soldiers and civilians.”

“Clearly, what we have been doing has not worked and it is unfair for our incapacity … to be creating a situation where people are holding the Mexican government and people responsible,” she said. “That’s not right.”

The first one, Drug cartels’ new weaponry means war talks about the arms race between the cartels:

Most of these weapons are being smuggled from Central American countries or by sea, eluding U.S. and Mexican monitors who are focused on the smuggling of semiauto- matic and conventional weapons purchased from dealers in the U.S. border states of Texas, New Mexico, Arizona and California.

The proliferation of heavier armaments points to a menacing new stage in the Mexican government’s 2-year-old war against drug organizations, which are evolving into a more militarized force prepared to take on Mexican army troops, deployed by the thousands, as well as to attack each other.

These groups appear to be taking advantage of a robust global black market and porous borders, especially between Mexico and Guatemala. Some of the weapons are left over from the wars that the United States helped fight in Central America, U.S. officials said.

There are even more ominous developments: Authorities reported three thefts of several hundred pounds of blasting material from industrial explosives plants in Durango during a four-day period last month. Authorities believe the material may have been destined for car bombs or remotely detonated roadside devices, which have been used with devastating effect in Iraq, killing more than 1,822 members of U.S.-led forces since the war there began nearly six years ago.

And weapons imported from other countries,

The enhanced weaponry represents a wide sampling from the international arms bazaar, with grenades and launchers produced by U.S., South Korean, Israeli, Spanish or former Soviet bloc manufacturers. Many had been sold legally to governments, including Mexico’s, and then were diverted onto the black market. Some may be sold directly to the traffickers by corrupt elements of national armies, authorities and experts say.

The second, The Mexican Canard, links to Adobe files on the two House subcommittee hearings. You can also watch videoclips of the testimony here.

The BBC has a map of the Mexican cartel’s areas of influence:

More on Hillary’s hand-wringing at the WaPo.

While supply and demand is an issue, corruption and lack of rule of law are the underlying causes of the Mexican drug cartel problem. With regards to weapons, U.S. officials have repeatedly requested serial numbers to track down the weapons seized in Mexico – but a majority of these weapons are illegal, non-U.S. made, and likely smuggled into the country from other regions of the world.