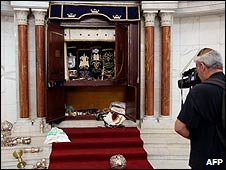 In today’s podcast at 11AM Eastern:
While seven police officers were among 11 people arrested for the attack on the Caracas Tiferet Israel synagogue last week, few are talking about the Anti-Semitic Germ in Chavismo and Chavez’s Jewish problem.

One fact that few have mentioned: The synagogue’s database of names and addresses was stolen at the time of the raid. In view of prior incidents, this is alarming.

The Metropolitan Police officers arrested for [allegedly] being responsible for the Mariperez synagogue attack are members of organizations directly under the management of Interior Minister Tarek El Aissami.

Assimi claims the main suspect is the rabbi’s former bodyguard.

By the way,
The BBC’s headline on their Americas page for this article reads “Synagogue suspects held in Venezuela”, leaving one puzzled as to whether the suspects were members of the synagogue.