CARACAS, Venezuela (AP) — Venezuela ordered Israel’s ambassador expelled from the country on Tuesday in protest over the Israeli military offensive in the Gaza Strip.

The decision by President Hugo Chavez to kick out the diplomat appeared to be the strongest reaction yet to the Gaza offensive by any country with ties to Israel.

The Venezuelan Foreign Ministry announced the move in a statement, saying it “has decided to expel the Israeli ambassador and part of the Israeli Embassy’s personnel.” 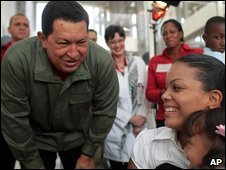 Chavez used his characteristic inflammatory language, this time while visiting a children’s hosptial:

“The Israeli army is cowardly attacking worn-out, innocent people, while they claim that they are defending their people,” Mr Chavez said during a visit to a children’s hospital in Caracas.

Back in 2006 Venezuela had expelled the Israeli ambassador from Venezuela over Israel’s defense following the Hezbollah attacks.

As readers of this blog know, Venezuela and Iran continue to form closer ties.