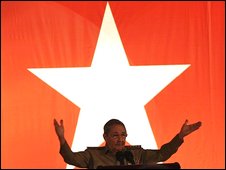 Fifty years of tyranny and economic failure and the BBC says the festivities are subdued. To cheer up everybody, Raul Castro came out and said the next 50 years “will also be of permanent struggle”:

“It is time to reflect on the future, on the next 50 years when we shall continue to struggle incessantly.

“I’m not trying to scare anyone, this is the truth,” he added.

Let’s be honest about it: the Castros have been preaching this message of struggle and sacrifice in order to keep themselves in power.

Investor’s Business Daily wrote about the economic disaster of 50 Years Of Failure; it’s a litany of disaster after disaster:

1959: Castro and his guerrillas take over and begin confiscating U.S.-owned private businesses.

1961: President Kennedy tightens the embargo. Castro blames it for plant shutdowns, parts shortages and 7,000 transportation breakdowns a month, leaving 25% of public buses inoperable. He then targets Cuban companies for expropriation.

1962: Begins food rationing. Half of passenger rail cars go out of service from lack of maintenance.

1966: Signs new deal with Soviets for $91 million in trade credits.

1970: Castro announces only 8.5 million tons of sugar produced. Blames U.S. Diverts 85% of all Cuban trade to the USSR.

1973: Tries for the first time to tie wages to productivity.

1980: Economic hardship forces Castro to permit farmers to sell surplus to state quotas in private markets with unregulated prices. 100,000 Cubans flee the island for the U.S. via the Mariel boatlift.

1983: Cuba signs accord in Paris to refinance its foreign debt.

1994: Some private-sector activity permitted. GDP per capita shows no growth, but Castro hails “recovery.” Agricultural output down 54% from 1989, with sugar at 4 million tons. Castro blames bad finances, and “errors and inefficiency.” Food consumption, according to USDA, falls 36%. Some 32,000 Cubans flee for Florida.

1999: GDP claimed at 6.2%. Subsidies from Venezuela begin. Castro blames U.S. dollar for woes and urges use of the euro.

2008: 4.3% GDP growth claimed, far short of 8% forecast. “One of the most difficult years since the collapse of the Soviet Union,” economy minister says. Hurricanes and fuel prices blamed.

That would be bad enough if that was the only story, but the real horror lies in the millions of people whose lives have been destroyed not only in Cuba but in Africa during the war in Angola, and in Latin America.

I’ll be posting on this article on sex tourism in Havana Historia de una jinetera later on. It is describes the sordid life of a woman whose only means of survival in the Revolucion is prostituting herself to tourists.

UPDATE
If the Beeb had managed to ask, they might have found out that the celebration was subdued because local Cubans were not allowed. The Miami Herald reports that

The elaborate gathering shown live on Cuban television was a stark contrast to a tense calm that hung over the host city earlier in the day, perhaps because shortly after the New Year began, authorities banned Cubans from one of the city’s busiest square.