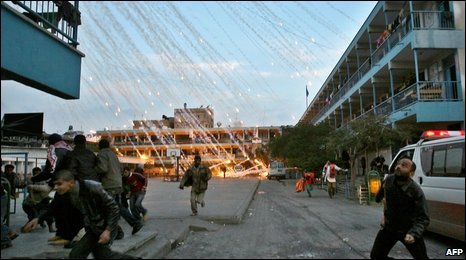 Richard Fernandez writes on the reality about Hamas:

Up to a hundred Palestinians in Gaza who have defied house arrest orders have been tortured in children’s hospitals and schools converted into interrogation centers. People have been shot in the legs or had their hands broken. The campaign has been described as a “new massacre”. One victim had his eyes put out. No one was safe from the torturers, not even those attending funerals. When is will the UN act to put a stop to this horror? Won’t President Obama intervene to stop these barbaric acts? Aren’t international human rights monitors going to put a stop to this? When will War Crimes charges be preferred against the perpetrators?

Why? Because Hama is in charge of the torture and their victims are simply Fatah members. If it were Israel who had done these things, well then … But since it’s Hamas, the same Hamas for whom thousands have been marching in ’solidarity’, it’s a non-story.

You won’t find this information at the BBC, which has become as close to a Hamas supporter as you can find outside the Middle East; their reports fail to mention that Hamas uses civilians as shields, and that Israel has been sending hundreds of trucks with humanitarian aid every day. I don’t think the Beeb even wants to know about the Hamas torturers.

Richard raises the issue of the ceasefire:

In another strategic world, the Israeli incursion into Gaza would be create an opportunity for peace akin to those which sprang into existence in the latter parts of the Second World War.

Instead, the ceasefire will allow Hamas to rebuild with hundreds of millions of dollars going towards perpetuating its existence.

If you think this has nothing to do with our hemisphere, think again.