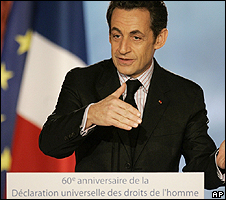 Iran has summoned the French ambassador in Tehran over comments made by the French president about his Iranian counterpart, Mahmoud Ahmadinejad.

Sarko, who has a pair, not only met with the Dalai Lama, something the Chinese didn’t like; Sarko said

In a speech about human rights Monday, Sarkozy said he had told former U.N. Secretary-General Kofi Annan that “it is impossible for me to shake hands with someone who dared to say that Israel should be wiped off the map.”

The BBC translates and quotes,

In the speech, given on 8 December on the 60th anniversary of the Universal Declaration of Human Rights, Mr Sarkozy said: “How is it that a people such as the Iranian people – one of the world’s greatest peoples, one of the world’s oldest civilisations, sophisticated, cultured, open – have the misfortune of being represented as they are today by some of their leaders?

“I have said this to my friend Kofi [Annan]: I find it impossible to shake hands with somebody who has dared to say that Israel must be wiped off the map.

“I know perfectly well that we must resolve what is perhaps the most serious international crisis we are having to resolve: that of Iran moving towards a nuclear bomb.

You can listen to Sarko’s speech in the original French. (By the way, Sarko has a lovely speaking voice. It’s a pleasure to listen to him. But I digress.)

While he was at it, earlier in the speech he also called on Mugabe to resign.