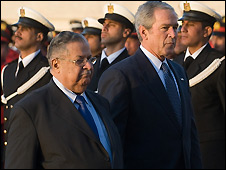 Bush Arrives in Iraq for a Final Visit

Mr. Bush and his aides have touted the security agreement as a landmark in Iraq’s troubled history, one made possible by the dramatic drop in violence over the last year. They credit the large increase in American troops Mr. Bush ordered in 2007 for creating enough security to allow political progress to take root.

The surge worked. The NYT can’t bring itself to admit it, but it did.

This is Pres. Bush’s fourth visit to Baghdad, a victory lap.

THOUSANDS Celebrate In Baghdad As Violence Falls, and women in Baghdad take to the road again.

For Sunday reading and roundup, Shiny happy dhimmi – #5 is up! More on Pres. Bush’s Baghdad visit at Memeorandum.

UPDATE: All journalists will remove their shoes at the door from now on:
Via Patterico,

No discarded footwear is going to take away the fact that our plan in Iraq is succeeding. No wonder the jihadis are upset!