One of my nightmares about Hillary as POTUS was for her to have been in office for two terms, followed by Chelsea, so the Republic would look like a Roman Empire scenario with the Julians and Claudians: Bush-Clinton-Bush-Clinton-Clinton, AND Bill esconced in Hillary’s Senate seat, like a 21st Century Ted Kennedy, but without the drowning.

For the time being, that scenario is suspended: 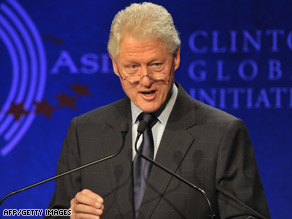 Bill Clinton not interested in wife’s Senate seat, since it would cramp his fundraising style:

Responding to such speculation, Clinton spokesman Matt McKenna tells CNN that “it’s completely false. President Clinton is excited to expand the work of his foundation which has more than 1,000 staff and volunteers in 44 countries advancing projects on HIV/AIDS, climate change, sustainable economic development and childhood obesity.”

Bill’s doing it for the fat kids.

Warms the cockles of my cold slim conservative heart, I tell ya.

UPDATE
A chill, Six Easy Steps to President Hillary in 2012

In today’s podcast at 10AM Eastern I’ll talk about how Rape looms large over Haiti slums and the Amnesty International report, ‘Don’t Turn Your Back on Girls: Sexual violence against girls.

Don Surber, via Larwyn, has the details:
Barack Obama to buy rare £20,000 rhodium ring for his wife to say ‘thanks for your support’

Answer: How sweet of Barack Obama.

Question: But what about the economy?

Answer: It will help a little but not a whole lot.

Question: But isn’t that obscene?

Answer: No. What is obscene is people who want to take away the right of people to spend the money they make the way they want to spend it. I trust as president he will be more generous in his charitable donations. But buying her a nice ring is a nice thing a husband does for his wife. I ain’t spending the next 4 years hating the man.

A few years ago I bought The Husband a Rolex for his birthday in appreciation for his support.

It’s a free country, and everybody has a right to spend their hard-earned money every best way they see fit. Let’s keep it this way.

Via the Baron, three articles from Asia News:

Economic growth has benefited the corrupt politicians and businessmen. This is the opinion of experts, in the face of continued serious corruption cases. A former parliamentarian and torchbearer, and a “model” businesswoman, has been arrested. As has the second richest man in the country.

Chinese leaders in panic over crisis and unemployment

A rapid rise in unemployment is expected, because of the shutdown or lower production of many companies. The jobs of 120 million migrants are at risk, but also those of 6 million new graduates. Social protests are growing among workers fired without proper severance pay.

The World Bank warns that the situation could become even worse. Beijing, preoccupied over rampant unemployment, is addressing the problem by stimulating domestic consumption. But meanwhile, it is unable to contain the growing social protests.

The Post reports that Hu has more on his mind than a cyclical business contraction. The Chinese manufacturing sector needs constant growth above a certain level to keep its population satisfied enough not to revolt against the oppressive central government. While China is still expected to grow its economy during this downturn, the question is whether it will be enough to keep up with demand for work.

This situation has dire repercussions on Latin American economies. As I was mentioning in today’s Carnival, China seeks greater influence and trade into Latin America. Compared to Russia, China is “the new partner that matters”, as The Economist put it.

On the positive side,

Mr. Hu also played a major role in the G-20 meeting in Washington at the beginning of his most recent trip. China’s active cooperation, which Mr. Hu promised again in Lima, is critical in efforts to work out the current financial crisis. China now has much to gain from helping Washington survive and from funding the World Bank and International Monetary Fund.

On the negative side,

Confusion and disappointment over China’s misunderstood promises of foreign direct investment have been compounded by disingenuous reports from Beijing. One Chinese trade official claimed that $22.7 billion in FDI had been placed in Latin America by the end of 2006. If so, the vast bulk was plunked in tax havens in the Caribbean from whence it can be sent back to China to take advantage of preferences given to foreign investment firms. Also, some of Latin America’s problem may be that the Latins have failed to propose viable investment projects.

From the point of view of Latin America, diversification is a very good thing. For diversification with China to be a meaninful force in the region, the Chinese economy must remain strong.

And that’s where the problem lies: If the Latin American economies become overly reliant on the Chinese, their collapse will be catastrophic. Let’s hope the trend towards diversification is genuinely diverse.

Capital Commerce posts regularly on the the geopolitical and economic fallout of a sharp slowdown in China’s economy:

Simply put: Slower growth could lead to dangerous political instability. The sole source of the authoritarian government’s legitimacy has been its ability to deliver an even-rising standard of living for more than a generation.

Go to Capital Commerce and read back.

UPDATE
If you think all of this has nothing to do with you, read Kudlow:

The real source of today’s stock market plunge is a collapse of China’s purchasing managers index, which fell to 40.9 in November from 45.2 in October, its fourth straight monthly drop. Inside the index, export orders fell significantly. All of this suggests big cuts in China production, employment, and investment, including infrastructure investment.

Over dinner last week economic Nobelist Robert Mundell, who advises the Bank of China and travels there every other month, told me the Chinese economy is in bad shape. As a bulwark for the global economy, the China card is fast turning unreliable. Not only are stocks falling everywhere else in response to this disappointing China news, but commodity prices like palladium, silver, gasoline, oil, and gold are all plummeting today. I’ve only seen one news story that reported on this China economic decline, but I’m convinced it’s the main factor behind the U.S. stock drop.

Meanwhile, China’s yuan is starting to depreciate This development may be a function of China’s weakening economy, but it also may be a policy change by the Bank of China toward devaluation rather than appreciation.

I’d like to reiterate my support for Mr. Mundell’s idea for a one-year tax holiday on U.S. corporate profits, then segueing to a 20 percent marginal tax rate on U.S. business from the current 35 percent rate. It is business, not government, that creates economy-growing jobs. Although U.S. profits have slipped (IRS/NIPA profits after tax have dropped 9 percent from their peak in late 2006), they still totaled $1.5 trillion thru the end of the third quarter. After tax, that’s $1.1 trillion.

So, with roughly a $400 billion tax bill at stake, a tax-free holiday would provide a big pool of cash for U.S. business recovery. And a lower marginal tax rate after that would make it pay more after-tax to invest in businesses. The Mundell tax-cut recovery plan is especially important now that the NBER has just officially declared a recession beginning in January.

Once again, I repeat, government cannot spend our way into prosperity. However, strengthening incentive rewards would boost the animal spirits of investors and businesses to put risk money back to work. This would produce economic recovery.

Around one in 10 respondents to the survey, carried in November, said their favourite free activity was window shopping and 6% chose going to a museum as the cheapest way to pass the time.

But the sexes differed on their priorities, with women preferring to gossip with friends while men had sex firmly at the top of their list.

Which reminds me of another Tom Jones song,

(Yes, I’m working on a serious post. Please bear with me.)

Rant alert
The following post contains a rant. Proceed accordingly.
Years ago PBS was running Deepak Chopra infomercials during their begathons, which is one of the reasons why I stopped watching PBS – anyone who fires Louis Rukeyser and hires Deepak must be out of their minds.

Now Deepak the New Age guru has come out with the oldest blame theory: blaming – who else! – the US for the Mumbai attack:

In his CNN interview, he was no less clear. What happened in Mumbai, he told the interviewer, was a product of the U.S. war on terrorism, that “our policies, our foreign policies” had alienated the Muslim population, that we had “gone after the wrong people” and inflamed moderates. And “that inflammation then gets organized and appears as this disaster in Bombay.”

Dorothy Rabinowitz does a great job of ripping Deepak up one side and down the other, but for the record allow me to say that anyone who lives in our country, the best country in the world, and who benefits and profits from the myriad opportunities we offer and enjoys all our liberties, including abusing freedom of expression to insult the US, is a thankless jerk with no credibility, and should probably go back to the underside of the rock he crawled out of.

Now that I got that off my chest, I feel much better.

UPDATE
Now he’s blaming the US for creating the Taliban.
Is there anyone who can possibly support this charlatan?

Welcome to the Carnival of Latin America and the Caribbean. If you would like your posts included in the next Carnival, please email me, faustaw2 “at” gmail “dot” com.

This week’s focus: China’s growing influence in our Hemisphere. I’ll be podcasting on China’s Latin American influence today at 10AM Eastern. Chat’s open by 9:45AM and the call-in number is 646 652-2639.

LATIN AMERICA
China’s Latin American Tango
A partnership with benefits for both sides.

Latin American diplomacy: Friends of opportunity
China, rather than Russia, is the new partner that matters

Challenges in Latin America: Russians in Caracas, Misrule in Managua

In today’s WSJ, Are Argentina’s Cows Happy Eating Grain? This matters because grass-fed beef is Argentina’s most famous export.

BOLIVIA
Bush Suspends Trade Accord With Bolivia in Anti-Drug Dispute

Cutting of trade benefits is the result of Bolivia’s “failure to cooperate with the U.S. counternarcotics efforts,” a condition of maintaining trade preferences, such as reduced tariffs, Perino said.

COLOMBIA
DMG, which went under, has its own YouTube channel. The founder of DMG was arrested in Panama two weeks ago. This article (in Spanish) refers to DMG as a Ponzi scheme.

Ecuadorian president Rafael Correa is heading to Iran this week

Hopeless, Clueless and Hapless Correa & ALBA Come to Bury Capitalism: Not to Praise It

WAR ON THE BORDER

Via Lucianne, House of shattered dreams: US deports more and more Mexicans

The recession now emerging in places like Florida and Ohio has been a fact of life in Puerto Rico for three years. Unemployment has climbed to nearly 12 percent. Taxes have gone up, purchasing power has declined, and the island’s roughly four million residents are unlikely to be patient with their new leader.
…
The structural challenges are immense. Government here plays an outsize role, employing 20 percent to 30 percent of workers on the island, and it is on the verge of bankruptcy. The current administration said this week that it would end the year with a $2 billion budget deficit. One official suggested it was struggling to make payroll, and some institutions — like the Center for Puerto Rican Studies — already report that they have not received government money they are owed.

The 2008 Venezuelan results: 3 – Yaracuy as the epitome of all that is wrong with the Venezuelan Political System

Hugo Chavez reverts to his usual self a day after the election, blaming everyone but his perfect self

Russia’s Challenge On The High Seas

Venezuela’s regional elections: Checked, but not halted
Some satisfaction for Hugo Chávez but more for his opponents

OTHER ROUNDUPS and news in Spanish
WSJ Americas
HACER
Noticias24