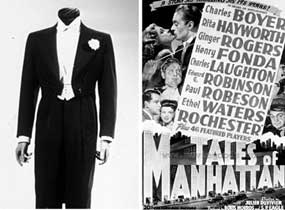 Edgar G. Robinson is down in the gutter on skid row (really), when they start playing the first few bars of the Cornell song, High Above Cayuga’s Waters.

Lest we think that’s a disparaging comment on Cornell, Robinson’s story has to do with his invitation to an alumni reunion. Robinson is a wonderful actor and he recites without irony,

To thine own self be true, and it must follow, as the night the day, thou canst not then be false to any man.

Without irony, as his character is appearing in front of his fellow alumni (Class of 1917) as a successful business man. Then George Sanders, arrogant and full of himself, comes into the room. And the truth is revealed.

The next story involves W.C. Fields, coconut water, and a sales presentation. Hilarious.

Much different is the sequence starring Paul Robeson. According to Wikipedia,

This section of the film, which featured what were considered crude black stereotypes even in 1942, came under severe criticism from both Edward G. Robinson, and especially, Paul Robeson, a champion of good film roles for blacks. Robeson was so incensed that he vowed never again to act in a Hollywood film. The sequence was, in the past, sometimes cut from television showings, giving the film a very abrupt ending.

I’m glad that FMC presented the movie in its entirety, because we should see, examine and discuss these stereotypes. One can see why Paul Robeson was so upset.

The tailcoat’s tales all involve the truth. I wonder where one can find that tailcoat. Every groom should wear it at his wedding.

And don’t miss… Alexander Olch’s post on the film. Recently I bought my son his first good suit, and Olch’s post really resonates with me.