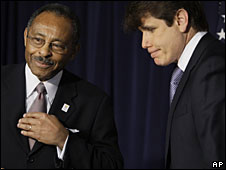 Barack Obama says Democratic senators should reject the man proposed by Illinois Governor Rod Blagojevich to replace Mr Obama in the US Senate.
…
The president-elect said he agreed the Senate “cannot accept” a new senator chosen by Mr Blagojevich, adding that Mr Blagojevich himself should resign.

Earlier today, Larry Reid did, too. Rick Moran looks at it from the impeachment point of view

As they say, developing…