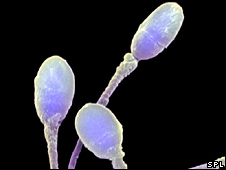 Men of higher intelligence tend to produce better quality sperm, UK research suggests.
…
They found that those who performed better on intelligence tests tended to have more – and more mobile – sperm.
…
Conversely, people with robust genes might be blessed with a biological “fitness factor” making them fit, healthy and smart.

But don’t marry just any geek: Marry the geek who’s a good man, who is truthful and honest, and who loves you.