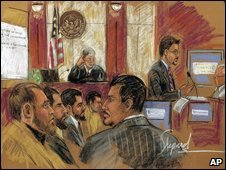 They were found guilty of conspiring to kill US soldiers at the Fort Dix military base in New Jersey, but cleared them of attempted murder.

Five Muslim immigrants accused of scheming to massacre U.S. soldiers at Fort Dix were convicted of conspiracy Monday in a case that tested the FBI’s post-Sept. 11 strategy of infiltrating and breaking up terrorist plots in their earliest stages. The men could get life in prison when they are sentenced in April.

The five, who lived in and around Philadelphia for years, were found guilty of conspiring to kill U.S. military personnel. But they were acquitted of attempted murder, after prosecutors acknowledged the men were probably months away from an attack and did not necessarily have a specific plan. Four defendants were also convicted of weapons charges.

The federal jury deliberated for 38 hours over six days.

Here are their names,

The Breitbart article has more details on the case.

UPDATE
Allahpundit remembers these were the guys who got found out by dropping the tape off at Circuit City to be transferred to DVD,

an encounter that gave rise to one of the immortal lines of the war on terror.