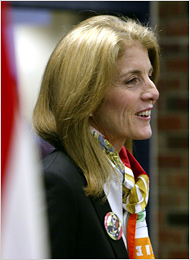 For those of us tired of political dynasties, be it Kennedy, Bush, Gore, or Clinton, here’s the latest in Kennedy endless saga,
Kennedy Is Said to Cast Her Eye on Senate Seat

Caroline Kennedy, a daughter of America’s most storied political family who for many years fiercely guarded her privacy, is considering whether to pursue the Senate seat expected to be vacated by Hillary Rodham Clinton early next year, a family member said Friday.

Doesn’t Caroline Kennedy for Senate, never having run for anything much less won an office, smack a little too much of aristocracy?

Aristocracy, as in dynasties, but also of nepotism once removed. But the NYT sees is at “star power”, because,

The anticipated vacancy in the Senate seat, which was once occupied by her uncle Robert F. Kennedy, has set off intense speculation in the political world. Any interest from Ms. Kennedy could instantly overshadow others whose names have been mentioned as possible successors to Mrs. Clinton, including the state attorney general, Andrew M. Cuomo, and several members of the New York congressional delegation.

And Ms. Kennedy could satisfy those Democrats who have been urging the governor to find a replacement for Mrs. Clinton with star power who can continue to bring attention to New York and its issues in the Senate.

Star power, since that’s the ticket.