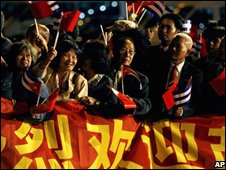 Mr Hu arrived in Cuba from Costa Rica, where he signed co-operation and investment agreements and discussed setting up a free-trade agreement between the two countries.

He will travel on from Cuba to Peru where he will attend the Apec (Asia-Pacific Economic Co-operation) summit in Lima on 21 and 22 November.

But China is not the only power interested in securing greater access to the raw materials and other resources that Latin America offers. President Hu will be followed next week by Russian President Dmitry Medvedev, whose tour of the region includes a visit to Cuba.

Noticias24 has the graph:

I’ll be talking about Hu’s tour of our hemisphere in today’s 15 Minutes on Latin America. Chat’s open by 9:45AM Eastern, and the call in number is 646 652-2639. Please subscribe to the RSS feed and through iTunes – you can listen to the podcast anywhere, any time!

And an oldie but goodie: Hu’s on First