Welcome to the Carnival of Latin America and the Caribbean. If you would like your posts included in next week’s Carnival, please email me: faustaw2 “at” gmail “dot” com.

The opposition’s wins today are a blow to Chavez’s drive to centralize control of the oil-exporting country. While the president remains popular among poor voters, accelerating inflation, rising crime and a plunge in oil prices have caused voters to question his socialist political agenda.

Last year voters rejected his proposal to eliminate presidential term limits, and opposition parties expect Chavez to try make a second run at changing rules that will force him to step down in 2013.
…
Today’s wins for the opposition in a handful of the country’s most populous states and its largest city set the stage for increased conflict with the president. Opposition parties have been marginalized since Chavez’s coalition nearly swept regional elections in 2004 and won almost every seat in the National Assembly in 2005.

During the election campaign this year, Chavez threatened to suspend funding for development projects where opposition candidates win.

Why did he lose Caracas? Crime:

Ledezma said he’ll make crime reduction a priority as mayor of greater Caracas. Caracas’s homicide rate jumped to 130 per 100,000 people last year, a 47 percent increase from 2005, according to government data compiled by the Central University of Venezuela’s Center for Peace.

Chavez lost the most populous states (link in Spanish).

I’ll be talking about this in today’s podcast at 10AM Eastern. You can listen to the podcast here.

BRAZIL
Elhefnawy: The Next Wave of Nuclear Proliferation

The scribes’ lament: A dying profession in the heart of the city 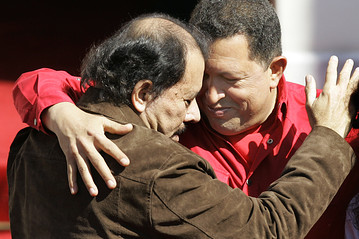 Gang wars turn Caracas into a murder capital
Nearly 3,000 have been killed in the city over the past 12 months amid drug conflicts and kidnaps

Special thanks to the Baron, Eneas, Larwyn, Maggie and Maria.

This week’s podcasts and posts:
FrontLine on Chavez
I first posted that GM to spend $1billion of the bailout money… in Brazil, but am glad to say that I was wrong.
Colombian tailor hits the big time with bulletproof clothing; Guardian blames Dick Cheney.
APEC, Lula’s terrorist chief of staff, and the Venezuelan governor elections: 15 Minutes on Latin America
Today at 10AM Eastern: Humberto Fontova
Hu’s with Fidel? Yeah, right.
NYT: Pass the Colombian Trade Pact