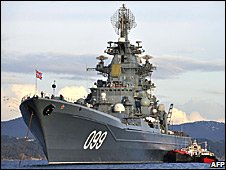 Just in time for the US holiday weekend, Russia and Venezuela are conducting joint military excercises in the Caribbean:

The exercises coincide with a visit to Caracas by the Russian president, Dmitry Medvedev, who is due in Venezuela on Wednesday, and are illustration of how close military ties between the two countries have grown in recent years.

But the Russian deputy foreign minister, Sergei Riabkov, said suggestions in the media that the naval exercises signal a return to Cold War politics in Latin America were misguided.

“There is no geo-political connotation whatsoever,” he told the BBC.
…
While the Russian government has been playing down any political dimension to the training, the Venezuelan president, Hugo Chavez, has been doing just the opposite.

In recent speeches, he has referred to Venezuela’s “strategic partnership” with Russia and said the military ties were part of building a more “multi-polar world”.

Following the APEC summit in Peru, where he signed agreements involving the transportation of gas, mining, medicine, space technology and nuclear energy, Russian President Dmitry Medvedev is touring Latin America and yesterday was in Brazil; today he’s scheduled to visit Venezuela, a buyer of Russian arms, and Cuba later this week. In Peru,

Regular readers of this blog know that Venezuela and Russia have proposed forming an OPEC-type cartel on natural gas.

CARACAS, Venezuela, Nov. 25 — The arrival of Russian President Dmitry Medvedev and a naval squadron in Venezuela this week is an unequivocal message to President-elect Barack Obama that his most nettlesome challenge in the Americas will be Venezuela’s populist government and its oil-fueled crusade against U.S. influence, political analysts say.

President Hugo Chávez, who once called President Bush “the devil,” has held out his hand to Obama and expressed a willingness to reengage Washington after expelling the U.S. ambassador in September. Chávez also describes his scheduled meeting with Medvedev on Wednesday and the joint naval maneuvers with the Russian flotilla as friendly exchanges that are not designed to provoke the United States.

But despite Chávez’s conciliatory words, Obama faces the task of blunting the pretensions of a country intent on building alliances with American adversaries, including Iran and, critics say, Marxist guerrillas in neighboring Colombia. Obama also faces more immediate worries, including two wars, looming questions about Iran’s nuclear ambitions and a resurgent Russia.

Venezuela poses no strategic risk. Chávez, though, has worked energetically this decade to fill the vacuum created by declining U.S. influence in Latin America, a product of Bush administration policies that were unpopular here. In the process, Chávez has become perhaps the world’s most vocal anti-American leader and structured an alliance with figures unfriendly to Washington in countries as divergent as Nicaragua and Belarus.

“Obama’s dealing with a country that in the past eight or nine years has been taking a very strongly anti-U.S. position that puts the United States in a central negative role,” said Peter DeShazo, a former U.S. diplomat who oversees the Latin American program at the Center for Strategic and International Studies in Washington. “Chávez’s whole revolution is based on supplanting the influence of the U.S. in the region.”

It’ll be interesting to watch how Chávez refers to Obama; one will asume Chávez will have to tone down the “racist imperialist” rethoric down a notch. Or maybe not: Obama is not the type of leader Chávez likes – a dictator:

Venezuela has entered into economic agreements with President Alexander Lukashenko of Belarus, who has been called Europe’s last dictator, and signed contracts worth $4.4 billion to buy assault rifles, military helicopters and combat aircraft from Russia. Venezuela has built a tight alliance with Nicaragua’s Daniel Ortega, who is sharply at odds with the United States, and has subsidized oil sales to Cuba.

Medvedev’s two-day visit is part of a Latin American tour that is aimed at revitalizing Cold War-era ties with left-leaning countries of the region and is also seen as an attempt to rebuff US moves in former Soviet lands.

The visit of a group of Russian warships led by a nuclear-powered cruiser, which moored off the coast on Wednesday, has been portrayed by Russian media as mirroring US deployments in the Black Sea in support of Moscow’s adversary Georgia.

Some 1,600 Russian forces traveling on four Russian ships were joining 700 Venezuelans for patrol and rescue exercises in the Caribbean Sea that are due to start on December 1, officials said.
…
On a tour that also includes Peru, Brazil and Cuba, Medvedev has said he wants to restore “privileged relations” with Latin American countries in a fierce contest for influence. Of those only Cuba was formally aligned with Russia prior to the Soviet collapse.

The United States and neighboring Colombia have voiced concern about the Venezuelan purchases, warning of a potential arms race and destabilization.

Venezuela’s state-run energy company is also to sign a deal with five Russian oil companies to produce and refine Venezuelan oil in the Orinoco Basin, while there are also plans for a civilian nuclear power station, officials have said.

US officials have played down the military significance of the Russian-Venezuelan naval exercises, while saying they will keep a close eye on them.

Some analysts have detected an element of bluff in current Russian moves in Latin America, saying that the economic crisis now buffeting Russia is likely to hinder plans such as possible Russian involvement in a South American gas pipeline.

Others have criticized the timing of Russia’s show of defiance as inept given the imminent arrival in office of a US leader, Barack Obama, who has attracted support from countries around the world and may prove more flexible on the missile defense issue.

Bluff or not, make no mistake: these visits and military maneuvers were timed to coincide with the US election and transition period, and also with the holiday weekend.

I’ll be talking about this in today’s podcast at 10AM Eastern. The call in number is 646 652-2639, and chat’s open at 9:45AM. You can listen to the podcast, live or archived, here. Please also subscribe to the podcasts’ feed, and you can subscribe through iTunes.