While we were watching the election and its outcome, there were several big stories in the hemisphere:
The most dramatic, by far, was the airplane crash in downtown Mexico City last Tuesday at 7PM during rush hour. The airplane, which was carrying Interior Minister Juan Camilo Mourino, burst into flames. Amazingly, only fourteen people died. While Mexican authorities insist there was no foul play involved, many Mexicans are suspicious, since among the passengers was the country’s former top anti-drug prosecutor Jose Luis Santiago Vasconcelos. Additionally,

The burst of conspiracy-theorizing came from more than the crash alone: Many Mexicans feel their leaders have lied so many times about so many things over the years that it’s hard to believe them, even when they might be telling the truth.

Some of the most significant events in Mexico’s modern history — from the 1968 massacre of demonstrators in Mexico City to the 1994 assassination of presidential candidate Luis Donaldo Colosio — are synonymous with cover-up or farfetched official conclusions.

The long reach of drug gangs has heightened the public’s sense of dark and powerful forces at work beneath the surface, usually in league with crooked police or government officials.

As readers of this blog know, Mexico has been fighting a drug war which has reached a crisis stage at this point.

Two other big stories in the Caribbean: A 3-story school building collapsed in Haiti last Friday, killing 92 people. The BBC has a Slideshow.
Hurricane Paloma, the fifth one this year, hit Cuba. Photos at Noticias24

Another big story that went underreported here in the US: the G-20 meeting in Sao Paolo, which will convene in Washington on Friday

In lighter news, narcissist-Lenninist Hugo Chavez claims that Obama’s victory was gestated in South America. Meanwhile, Hugo took from the Canadians and gave to Russia (see below).

Religion in Latin America
Hola Luther: A holiday that is a cultural milestone

ARGENTINA
A must-read, by Mary O’Grady: 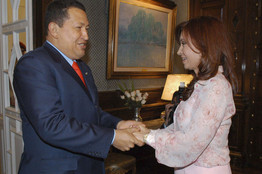 The exposure of this thuggish behavior of the Venezuelan government is embarrassing enough. What is worse for Mr. Chávez is Mr. Antonini’s testimony that he was told by a PdVSA executive that there was another $4.2 million on the same plane and that there had been other operations to smuggle cash into Argentina for political purposes. Kauffman further testified that the Venezuelan ambassador to Bolivia had told him he had “$100 million to spend on Bolivia.” Kauffman said he had been negotiating the sale of $12 million of antiriot equipment to Bolivia, to be paid for by Venezuela.

CK viaja a EE.UU para participar en la cumbre del G20 Cristina Kirchner travels to the US for the G-20, but will also make stops in Algeria, Tunisia, Egypt and Libya.

Evo Morales demands a model against capitalism in Latin America

The credit crunch reaches Brazil, Inc. A big bank merger points to a tougher outlook for the private sector, but at least this time the public finances are not the problem

COLOMBIA
The Paradox of Colombia

FALKLANDS ISLANDS
New Falklands constitution agreed
A new constitution for the Falklands has been agreed which the UK government says will “enhance local democracy” for the south Atlantic islands’ residents.

The ministry plane – a Learjet – came down during rush-hour in the financial district at about 1900 local time (0000 GMT), and burst into flames.

Via LGF linkreader, an article from last September, Murder in Mexico: the police who are no better than the criminals

From Centroamerica21, Elecciones en Nicaragua, on the municipal elections.

He told a Russian delegation that a memorandum of understanding would soon be signed with Rusoro.

It appeared that Sanz intends to replace the Canadian companies who operate the projects that contain some of Latin America’s largest gold deposits, with Rusoro, but he did not mention their names.

Russian the Ruffian tops himself in sucking up to Hugo Chavez

AMERICAN POLITICS
Via IBD Blog, How Obama should handle Colombia

Via Instapundit, A Chavista at the EPA? Follow the links.

Special thanks to Eneas, Larwyn, Maggie and Maria