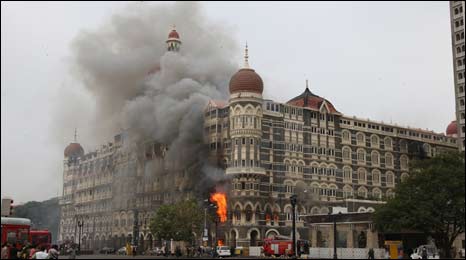 Don’t miss the SAJA podcast live at 10AM and 10PM Eastern for news and the best analysis on the web.

What They Hate About Mumbai

Mumbai is all about dhandha, or transaction. From the street food vendor squatting on a sidewalk, fiercely guarding his little business, to the tycoons and their dreams of acquiring Hollywood, this city understands money and has no guilt about the getting and spending of it. I once asked a Muslim man living in a shack without indoor plumbing what kept him in the city. “Mumbai is a golden songbird,” he said. It flies quick and sly, and you’ll have to work hard to catch it, but if you do, a fabulous fortune will open up for you. The executives who congregated in the Taj Mahal hotel were chasing this golden songbird. The terrorists want to kill the songbird.

Al-Qaeda websites on Thursday were swamped with messages from people who were celebrating the devastating Mumbai attacks which have left over 100 people dead and 281 injured. “Oh Allah, destroy the Hindus and do it in the worst of ways,” was one of the comments that appeared on Islamist forums on the Internet immediately after the attacks.

via the Baron, who also sent this photo essay [warning: many gruesome photos].

Note the failed car-bombing aimed at the Mumbai airport, at Barcepundit‘s roundup.

More links added throughout the day.