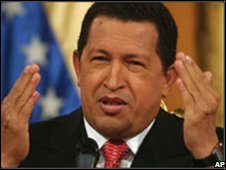 In response to Chavez’s outburst yesterday where he insulted the US ambassador to Venezuela and requested he leave, the US State Department announced Friday it has informed Venezuela’s ambassador to Washington that “he will be expelled” in retaliation for the expulsion of the US envoy to Caracas.

Noticias24 has it in Spanish.

Of course, Chavez has not halted oil exports to the US, in spite of all his threats.

The move was announced after the US Treasury said Friday it was freezing any US assets of two senior Venezuelan officials and a former official after accusing them of aiding Colombian rebels involved in drug trafficking.

Simon Romero points out that the drug trade is at the core of the dispute:

The United States and Venezuela have been sparring over a variety of issues, like claims that Venezuela is growing as a transshipment point for cocaine, Mr. Chávez’s plans for military exercises with Russia’s navy in the Caribbean and the safety of Venezuela’s airports for American airlines.

The Chávez government said Thursday that it would reduce the number of flights by airlines from the United States to Venezuela, which now number about 70 a week, after the Bush administration complained that American inspectors were not allowed to review the security of Venezuelan airports.

The airline issue offers a window into tension over claims of drug trafficking, with news reports here saying that government officials are hesitant to allow inspectors into facilities thought to be used to smuggle cocaine to the United States and Europe.

This week the US also froze the assets of two senior Venezuelan officials it accuses of aiding the FARC, and imposed sanctions on a third, all members of Chavez’s inner circle.

Bolivia was first. Honduras is now joining in the fray:

A series of tit-for-tat expulsions has left the US without ambassadors in three Latin American countries.

Bolivia and Venezuela have expelled their US envoys, accusing Washington of trying to oust Bolivia’s government.

Washington has responded by throwing out envoys from Bolivia and Venezuela and freezing the assets of three aides to Venezuelan President Hugo Chavez.

“We are not breaking relations with the United States. We only are [doing this] is solidarity with Morales, who has denounced the meddling of the United States in Bolivia’s internal affairs,” Mr Zelaya said.

In a rare display of what passes for moderation,

In a separate development, Nicaragua’s President Daniel Ortega said he supports Bolivia, but did not announce whether he would take any action against the US envoy in Managua.

The Russians are flying Blackjacks over the region while three Latin American countries are suspending ambassadors. You would think people would be talking about this.

Venezuela News and Views sees the alleged assasination plot as a ploy for internal consumption. The Devil’s Excrement notices that

Baduel has been saying for months that Chavez was going to create disturbances that would allow him to justify the postponement of the upcoming November 23 regional elections.

If Chavez is going through all these contortions for that purpose, he must be in much worse shape that anyone ever thought.

And adding to his troubles, the price of oil is now at $100, after falling below $100 a barrel in New York today for the first time since April. No matter the Russians, the diplomats, or hurricane Ike.