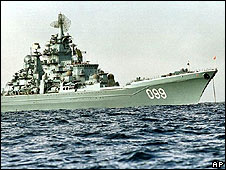 Two Russian strategic bombers landed in Venezuela on Wednesday as part of military maneuvers, the government said, announcing an unprecendented deployment to the territory of a new ally at a time of increasingly tense relations with the U.S.

Russia’s Defense Ministry said the two Tu-160 bombers flew to Venezuela on a training mission. It said in a statement carried by the Russian news wires that the planes will conduct training flights over neutral waters over the next few days before heading back to Russia.

They’re conducting the training excercises over the next few days, and they don’t say for how long they’re staying:

In Moscow, Defense Ministry spokesman Alexander Drobyshevsky refused to say how long the Venezuela deployment will last or say whether the planes carried any weapons.

Hugo Chavez says he would be piloting one of the aircraft, as if the Russians will trust him with one of their planes:

“It’s been a while since these planes have been around these parts, and Russia decided a couple of years ago to revive its strategic aviation program,” Chavez said during the inauguration of a medical center.

The moves came amid soaring tensions between Russia and the United States, including over the presence of US naval vessels sent close to Russian shores to deliver aid to Georgia.

Chavez also said plans for joint Russian-Venezuelan naval exercises in the region in November were currently being worked out, and said his closeness to the Kremlin would result in a cooperation that would “strengthen the country.”

His announcement confirmed an Interfax report in Russia citing the Russian defense ministry saying the bombers would be in Venezuela for training flights over “neutral waters.”

More details on the deployment:

Among the Russian ships to take part in the exercises would be the heavy nuclear-powered guided missile cruiser Peter the Great, a vessel with massive firepower whose cruise missiles can deliver nuclear or conventional warheads.
…
The planes — huge supersonic combat aircraft similar to the US B1 bombers, capable of flying long missions with a heavy payload — are capable of carrying nuclear or conventional bombs and/or cruise and guided missiles.

This kind of equipment requires a certain amount of infrastructure, which is being set up “as we speak”: El Universal reports that

“Before the end of the year, as part of a long-distance expedition, we are planning a visit to Venezuela by a Russian navy flotilla (…) and the temporary basing of anti-submarine aircraft of the Russian Navy at an airport in Venezuela,” said Nesterenko.

Looking at it from the point of view of American politics, may I quote Steve‘s famous words,

HOW MUCH IS KARL ROVE PAYING THIS MAN?

We’ve all heard Obama saying that Venezuela is “a tiny country that poses no threat”.

So the November election’s right around the corner and the Venezuelans are hosting friggin’ Russia with nuclear capable weapons, and they’re doing joint military excercises -training flights and all – right in the Caribbean.

Who do you think is capable of standing up to this? Obama, or McCain?

Thanks for the timing, Hugo.