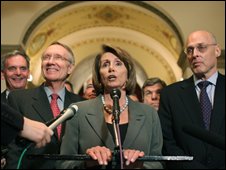 Congressional leaders and the Bush administration this morning said they had struck an accord to insert the government deeply into the nation’s financial markets, agreeing to spend up to $700 billion to relieve Wall Street of troubled assets backed by faltering home mortgages.

House and Senate negotiators from both parties emerged with Treasury Secretary Henry M. Paulson Jr. at 12:30 a.m. from a marathon session in the Capitol to announce that they had reached a tentative agreement on a proposal to give Paulson broad authority to organize one of the biggest government interventions in the private sector since the Great Depression.

Full details of the plan were not immediately available. Lawmakers said their staffs would be working through the night to assemble the package and post it on the Internet.

Top U.S. policy makers emerged from hours of tense negotiations with a clear message just after midnight Sunday morning: A deal to bailout U.S. financial markets has been agreed on and all that remains to be done is to commit the legislation to paper.

Treasury Secretary Henry Paulson, House Speaker Nancy Pelosi (D., Calif.), and Senate Majority Leader Harry Reid (D.), were flanked by key negotiators in the Capitol as they announced that a $700 billion plan to have Treasury buy up toxic assets had been all but finalized after hours of exhausting negotiations.

Hugh Hewitt calls it A Responsible Exercise of Representative Government; Ed says ACORN is out:

The funding of the Housing Trust Fund, the slush fund that feeds ACORN and La Raza, is out. You can thank House Republicans for enough obstructionism to get that result. Other changes made to the final version of the bailout, according to a source on the Hill:

It also suspends mark-to-market rules and requires a study on their effects on the collapse.

Color me skeptical. I don’t believe for a moment that ACORN will go quietly into the night, and I am fully convinced that Nancy and her camarilla will do anything to sink the economy if they believe it will get them control of all the branches of government and the Treasury.

Will have to read the actual document.

UPDATE
I don’t have time today to study the bill, but Larwyn sent this Comparison of original Paulson bailout to compromise proposal from House Republican Whip Roy Blunt’s office.

Ecuador is holding a constitutional referendum today. The Beeb touts it as Ecuador’s poor bank on referendum. In addition to lowering the voting age to 16, instituting civil marriage for gay couples, and legalizing abortion, the 444-article Constitution will

allow President Rafael Correa to seek re-election while giving him a hammerlock on the courts and the power to dissolve the legislature.

Noticias24 reports that Correa’s all set to default on Ecuador’s foreign debt.

I predict that the referendum will be approved by 60% of the official results; however, I was talking to a friend who believes it would be 51% at best.

This will be Ecuador’s 20th Constitution.

It’s pouring rain outside, which makes it a perfect day for listening to jazz music. The WSJ’s 5 best books on jazz, selected by John Edward Hasse:

Come to think of it, maybe I’ll spend the day listening to Marsalis YouTubes…

I don’t really like wearing rain boots, but it’s raining outside, so here are a nice pair of Kate Spade rubber flats: