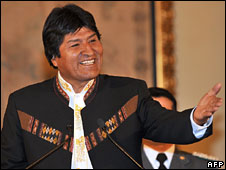 Is Evo Morales trying to create a distraction from the anti-Morales demonstrations and saboteurs across his country?

Bolivian President Evo Morales said the U.S. Ambassador, Philip Goldberg, is “persona non grata” and accused him of fomenting divisions in the country, EFE said, citing a speech by Morales in La Paz.

Morales, saying he “isn’t afraid of the empire,” gave the speech at the presidential palace hours after the government blamed opposition groups in eastern Bolivia for damaging a natural gas pipeline to Brazil, the newswire reported.

Evo Morales on Wednesday ordered Philip Goldberg to leave, accusing him of “conspiring against democracy” and encouraging the break-up of Bolivia.

President Morales publicly justified his decision with a series of allegations against Ambassador Goldberg. These allegations are baseless.

President Morales’ action is a grave error that has seriously damaged the bilateral relationship. The United States is the largest single country provider of development assistance to Bolivia, is Bolivia’s largest export market, and is the major provider of counternarcotics assistance. Our relationship has deep, historical roots, and benefits the peoples of both our countries. We regret that President Morales has chosen this course. It will prejudice the interests of both countries, undermine the ongoing fight against drug-trafficking, and will have serious regional implications.

Bolivia’s main exports are natural gas… and coca. A blast by saboteurs forced a 10 percent cut in natural gas exports to Brazil and it will take 15 days to repair a damaged natural gas pipeline and fully restore gas shipments . No disrruptions in coca deliveries were reported.

Meanwhile in Venezuela,
Chavez is ranting against the Bolivian opposition, and warns that Venezuela is ready to go to war in Bolivia if there’s a coup against “any of our governments” now that Russian bombers are in Venezuela. Chavez quoted Che Guevara and promised to create “One Vietnam, two Vietnams… a thousand VietNams”.

I can’t help but wonder what Vlad has to say about that. UPDATE I might have that answer here.