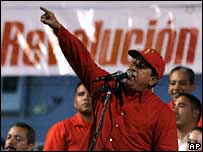 Speeding down the road to ruin, Chavez is now nationalizing the banks: First comes Banco de Venezuela, the country’s third-largest in terms of deposits and which is owned by Spanish Banco de Santander.

Venezuela’s President Hugo Chavez said on Thursday he will nationalize the local unit of Spain’s Grupo Santander bank, expanding his drive for state control of key sectors of the OPEC-nation’s economy.

Chavez, who threatened to take over banks last year,

said he had decided to buy Banco de Venezuela after Santander asked for permission to sell it to a local finance group.

“I said ‘No, I’ll buy it from you — what’s it worth? We’ll pay it,”‘ Chavez said during a live television broadcast.

We’ll see if “we’ll pay it” – Chavez said the same thing to the oil companies when taking over their assets and Conoco Phillips suffered a $4.5billion loss, which amounted to 10% of its proved reserves. Exxon lost $1billion, and is trying to find redress in courts; Chavez’s reaction to the Exxon lawsuits? Threatening that, if Exxon Mobil Corp. dares to freeze Venezuela’s assets, he will not sell any more oil to the United States.

However, in terms of Banco de Santander’s earnings, Banco de Venezuela accounts for “a tiny fraction of its earnings”, according to the Wall Street Journal. Reuters is even shedding a positive light on the news:

Gianfranco Bertozzi, an analyst with Lehman Brothers in New York, said the fact that Santander was looking to sell made the takeover less alarming for investors.

Perhaps it’s “less alarming” for Banco de Santander investors, but the situation is alarming enough for investors in Venezuela.

Anyone following Venezuela’s road to ruin won’t be surprised by the move:

The possibility of nationalization has long loomed over banks in Venezuela. Already, the Chávez government heavily regulates the country’s financial system and forces banks to lend to politically sensitive areas, such as agriculture, at cut rates. Spain’s biggest bank, Banco Bilbao Vizcaya Argentaria SA, U.S. giant Citigroup and others also have units in Venezuela.

Particularly since it furthers Chavez’s political agenda, close to a midterm election (if you asume that Chavez’s “term” is somehow finite)

The Santander unit may hold a special purpose for Mr. Chávez: Its vast network of branches nicely compliment the existing branch networks of government banks. Adding Santander to the mix would give Mr. Chávez a larger, more efficient reach when it comes to distributing the welfare payments and cash subsidies at the heart of his support.

Additionally, as Venezuela’s fourth-largest lender, it would give Chavez the illusion of “lending” to political cronies. In a country where the government controls the board of elections and keeps track of who you vote for, controlling credit through banks becomes a political weapon, especially when you have to deal with the Banco de Venezuela.

Venezuela News and Views points out that

the state does not need a new bank: it already has Banco Industrial (always losing money), Banfoandes (of more than obscure accounting, and used a lot to give money away to Chavez allies) and a plethora of “banks for the people” Banco del Pueblo, Banmujer, Banco del Tesoro, Banco X and Banco Y. Why, oh why, another bank?

I said a few years ago that property rights were a thing of the past in Venezuela. Take a look at what Chavez has nationalized, as listed by Reuters:
Oil industry:

Telecommunications (bear in mind that the Venezuelan Constitution had granted Chavez control of the internet):

Electricidad de Caracas, which was formerly owned by U.S.-based AES Corp
Seneca, in the island of Margarita

And let’s not forget the Hato El Charcote, a beef cattle ranch owned by Agroflora, a subsidiary of Britain’s Vestey Group, which Chavez seized in 2005,
the idle Heinz ketchup plant, one of many,

The move comes at a time that the Chavez government is investigating over 700 closed enterprises, evaluating them for their suitability for worker takeovers, via expropriation.

and CEMEX, the country’s largest domestic supplier of cement and ready-mix concrete.

Not surprisingly, the inhospitable business environment is making foreign private investors flee. The Iranians, however, are welcome to open cement factories.

Miguel Octavio analyzes the Banco de Venezuela nationalization in light of the a series of moves that began in May when the Government ordered all banks to sell their Bolivar-denominated structured notes. Go to his post and follow all four posts of his Guisonomics series, especially part III, How to buy a bank without using your money and IV, Why did the Government stop the use of structured notes to buy a bank?.