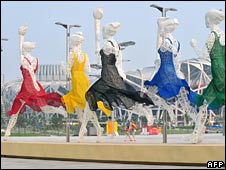 Samizdata says there will be 22,000 reptiles journalists at the Beijing Olympics.

I wonder how many athletes are participating.

Olympic officials have denied agreeing to curbs on internet access for foreign journalists covering the Beijing Games. Considering how the Communist Party’s cracking down on “dissidents, gadflies and malcontents” by the thousands, I don’t expect that the Communist Party gives a rat’s a** on whether the IOC “agreed” or not.

Don’t expect the journalists to be able to report what really goes on in China during the Games.