With the exception of the men’s swimming relay (for which I stayed up last night in spite of not getting much sleep the night before), I haven’t been watching the Olympics, so I missed this:

Chris Collinsworth: Tell the story when you first got your USA uniform.

Kobe Bryant: Well I had goosebumps and I actually just looked at it for awhile. I just held it there and I laid it across my bed and I just stared at it for a few minutes; just because as a kid growing up this is the ultimate, ultimate in basketball.

Collinsworth: Where does the patriotism come from inside of you? Historically, what is it?

Kobe: Well, you know it’s just our country, it’s… we believe is the greatest country in the world. It has given us so many great opportunities, and it’s just a sense of pride that you have; that you say “You know what? Our country is the best!”

Collinsworth: Is that a ‘cool’ thing to say, in this day and age? That you love your country, and that you’re fighting for the red, white and blue? It seems sort of like a day gone by(?)

Kobe: No, it’s a cool thing for me to say. I feel great about it, and I’m not ashamed to say it. I mean, this is a tremendous honor.

Video at Ms Underestimated has the video, which is also on YouTube, editorial bubbles and all:

To me it seemed like Collinsworth was simply trying to set Kobe up to say how awesome patriotism is, and how much he loves America. If you’ve watched any Olympics coverage ever, then this is exactly the kind of saccharine backstory pablum fed to the viewers, regardless of who the interviewer is, or which network is providing the coverage. It’s a part of the basic formula: controversy, hard luck, sick/dead relative, USA! USA! USA! So I don’t think the question was Collinsworth’s opinion, but instead a softball for Kobe to tee off on.

Either way, thank you Kobe. 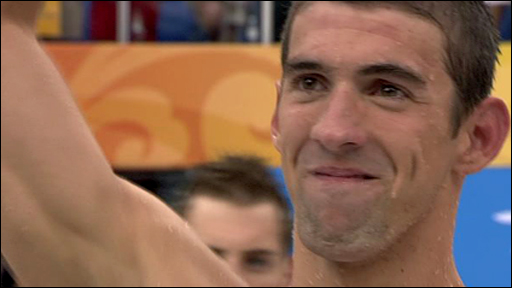 The WSJ has a terrific slideshow of Michael Phelps winning his 8th gold medal.

All of us middle aged and older remember being excited when Mark Spitz won his seven golds.