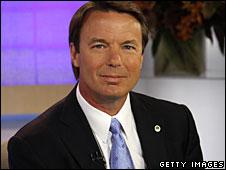 Elizabeth Edwards has posted a statement on Daily Kos where she asks for privacy. Understandably, as she is dying of cancer.

Doug Ross has the timeline.

Macsmind points out that

That you “knew” about this affair but continue to lie along with your lying husband even in the midst of accusations to the contrary and while people of your party seriously considered picking him for VP, makes you just as much a liar as he.

I am in complete sympathy with this statement and do not intend to write anything additional about the affair. Edwards is being lambasted on the talk shows for having “covered up” his affair. But it wasn’t just in his interest to cover it up; it was also in the interest of his family. And it was to his family that Edwards owed his primary obligation here. Thus, unless he violated some law in the process, covering up the affair was the right thing for him to do.

For now, I’ve had enough of the Edwards, their ambition, and their lack of respect for the American public.