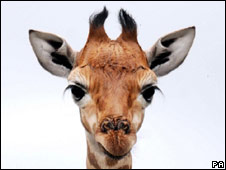 I’m putting together tomorrow’s Carnival of Latin America and the Caribbean and came across this article, Cuba plans Venezuela zoo barter

Cuba is to send zoo animals, which may include a lion, a pygmy hippopotamus and a baby giraffe, to Venezuela in exchange for veterinary equipment.

And what kind of veterinary equipment is that, you ask? Horse syringes? Large-animal weight scales? Equipment that is used exclusively in veterinary medicine?

The island’s zoo veterinary service will receive equipment such as electronic microscopes and centrifuges.

Electronic microscopes and centrifuges, which of course are not exclusive to animal medicine.

The BBC puffpiece rattles on,

Havana zoo boasts one of the best collections in the Americas, partly due to Cuba’s military roles in Africa.

In the 1970s, tens of thousands of troops fought in independence wars on the continent.

Which translated into plain English means, having lost the thousands of men fighting for the Soviet Communists in Africa, Cuba brought back a few critters for the zoo.

The real item, however, is that Cuba’s “exemplary healthcare system”, as it’s called by the Left, uses decades-old outdated equipment. Substandard equipment, no longer used in developed nations.

When Fidel Castro had to import Spanish gastroenterologist Dr. Jose Luis Garcia Sabrido, the doctor had to bring his own equipment because even in the Cuban medical apartheid system it’s not available:

Garcia Sabrido had traveled to Cuba aboard a Cuban government plane on Thursday, and the Cuban Embassy oversaw all details of the visit, the newspaper El Periodico de Catalunya reported Sunday.

The plane carried medical equipment, some of which is not available in Havana, the paper said.

Additionally, as I mentioned last year in my posts about the Princeton Human Rights Film Festival, the equipment used for training the medical students in Cuba is ancient. The microscopes shown at one of the medical schools were older than the microscopes my classmates and I used in high school biology class in Puerto Rico back in the year dot.

Cuba is so broke that
a. it cannot find another trading partner from which to procure the equipment
b. especially since the “embargo” with the US excludes medical equipment (i.e., it could even be purchased, not only from any of the world’s 100+ countries but even from the USA).
Hence, the giraffes-for-microscopes deal.

But there might be yet another reason: In a society where the real qualification for any job is one’s position with the Communist regime, one can not help but conclude that the people in charge don’t even know that new equipment exists.

Via Instapundit, Ilya Somin rips to shreds what little is left of the Cuban healthcare myth. Somin starts by pointing out that the “exemplary” assumption is based on data provided by the Cuban government:

But there is an even more basic problem with the “at least Castro improved health care” excuse: it assumes that official Cuban government health care statistics are accurate. I find that assumption highly improbable. A government that brutally represses dissent and executed over 100,000 political prisoners out of a population of just 6.3 million is unlikely to be above falsifying its official statistics in order to improve its image. That was certainly common practice in other communist societies, including those which Castro used as models for his own.

Somin doesn’t stop there: this post, The Impact of Castro’s Repression on Cuban Health, asks,

How much of an in improvement in health care would be enough for you to be willing to take a 1.5% chance of being executed and a 5.6% chance of being sent to a brutal labor camp for at least several years?

While living in a regime where food rations are poorer than they were for slaves under the Spanish Empire, at that.

To answer Prof. Somin’s question, some prefer to be exhibits at the zoo. At least the giraffes get to travel, and don’t live in labor camps.

After all, they get free healtcare.