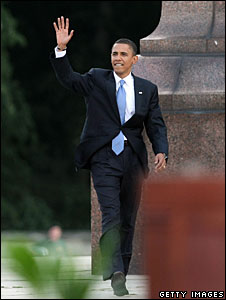 The other day Richard Fernandez was pointing out that

the press have already built him up to the point where they need him more than he needs them. He has become the story. Without him there would be no headlines; no sales.

Nowhere more so than in articles like Spiegel’s Gerard Sporl’s, No. 44 Has Spoken,

Sporl, who is chief editor of DER SPIEGEL’s foreign desk, admiringly ends his article by encouraging us to “allow ourselves to be warmed today, by this man at the Victory Column.”

Am I the only one who thinks this is creepy?

I don’t mean the “No. 44” part – after all, four years ago the French referred to John Kerry for several months before the November election as “America’s next president”, and the Victory Column rally was meant for European consumption. As the BBC points out,

Surveys suggest three out of four Germans want him to be the next US president.

What I find creepy is that a foreign desk editor of a major newspaper is so willingly embracing someone who comes to his country “to lay claim to become the president of the world.” President of the world? Creepy, yet not totally unexpected from a continent which has willingly given up national sovereignty for the sake of the European Union behemoth.

Obama’s Berlin speech was the platform for his transfiguration into the presumptive victorious candidate for global leadership.

Of course the speech itself had nothing to do with history: Don Surber fact-checked the text and found huge gaps between Obama’s perception and what actually happened when it comes to post-colonial African politics, World War II (the real reason why America and Germany came together AFTER Germany was defeated), Gen. Lucius Clay who initiated the Berlin airlift, September 11, the poverty-breeds-terror fallacy, France’s president, NATO, the connection between the Cuban missile crisis and the Berlin wall, and Iraq.

President of his own world, indeed.

But what really came through in that speech is Obama’s ever-present ambition:

In the audacity of his advancing megalomania, Barack Obama imagines that he has a manifest destiny to bring hope, not just to America, but to the world.

Not coincidentally, the American flag on the tail wing has been replaced by an enormous Obama O.

Obama won’t be visiting wounded American servicemen and women in Germany because, according to his campaign, the Pentagon sees it as a political event. Perhaps if he went by himself, as a private citizen, without his coterie of foreign policy advisors and his entrouage of network anchors, the Pentagon would consider it OK as the visit of a private citizen.

But would that be fitting for the first president of the world?

UPDATE
Obama In Berlin: Bussing In The Believers

They also brought in people from Democrats Abroad in other European countries.