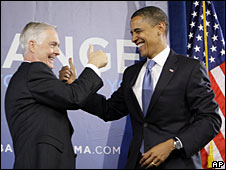 The AP reports: Democratic presidential candidate Barack Obama says “mental distress” should not qualify as a justification for late-term abortions, a key distinction not embraced by many supporters of abortion rights. How dare he try to control a woman’s womb!

Oops! Gosh, a rabid feminista took control of the keyboard for a few seconds. Seriously, tho, why does Barack Obama view as “wrong” a woman having a late-term abortion for so-called “mental distress” when he doesn’t even believe that a baby that survives a late-term abortion should be legally defined as a “person” who would be “accorded immediate protection under the law,” and also believes that such laws would be “one more burden on women”?

It’s getting so that even the NYT’s starting to notice the flip-flops. As Ed says, The New York Times editorial board went to bed with a virgin and woke up with a… well, a pro.

Charles Krauthammer refers to Obama as A Man of Seasonal Principles:

Now that Obama’s started on Iraq and abortion, and he’s thrown everyone and his grandma under the bus, that’s a good question.

The Obama strategy is clear: say anything that will get him elected, obliterate any difference between him and McCain, and expect to cash in on Bush Derangement Syndrome. For the Obama believers, and possibly for the electorate at large,, the flip-flops just don’t matter.

Ace is right on the money:

Yes, but so what? The Obama phenomenon is a cult of personality. His fanatical supporters are not voting for any particular set of policies; they’re voting for the man, plain and simple, whatever his policies may have been or might one day evolve into.

It’s all towards the greater good of Obamatopia after all. For that, you need to do the pivot.