Last week Doug Ross posted The Ultimate List of Barack Obama Flip-Flops. Wiretapping, coal, gays in the military, Palestinian elections, Jeremiah Wright, abortion, you name it – Doug has a complete itemization of links to each and every one. Ziva has a partial list of myths and facts on Obama. But there are still 99 days to go to the election, so I’m sure there’ll be more to add to those list. 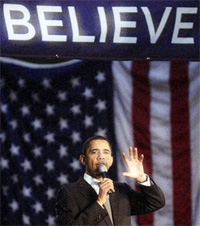 Rick Moran has his TOP TEN THINGS THAT CREEP ME OUT ABOUT OBAMA. Here are numers 8 and 5:

8. It creeps me out that the press seems hypnotized by this guy. Grown men and women blubbering like babes when talking about how exciting he is, how mesmerizing he is when he speaks. It’s as if “Invasion of the Body Snatchers” has come to life and the pods have been placed in every newsroom in America. It isn’t just Crissy Mathews and MSNBC. It’s news anchors at CNN, reporters for Time and Newsweek, editorial writers at WaPo and the New York Times. Big media is in the tank for this guy in a big way. They have thrown off all semblance of fairness (never mind objectivity) and just don’t care that people know they are in Obama’s corner. They can’t be shamed into changing. They evidently won’t be deflected from doing their best to elect Obama.

This kind of thing causes the hairs on the back of my neck to prick up – like walking through a graveyard at midnight. It is just plain creepy – no other word for it.
…
5. Has there ever been a creepier presidential hopeful’s spouse than Michelle Obama? She actually said this to a political gathering last February: “Barack Obama will require you to work. He is going to demand that you shed your cynicism. That you put down your divisions. That you come out of your isolation, that you move out of your comfort zones. That you push yourselves to be better. And that you engage. Barack will never allow you to go back to your lives as usual, uninvolved, uninformed.”

Rarely has there been a creepier utterance by a major candidate for president or his spouse (Ron Paul has said some very, very creepy things). This one set off alarm bells in my head the moment I heard it. It elicited the question that many of us who oppose this guy have been asking more and more frequently lately.

Just who in the hell does this guy think he is? “Require” us to do what? “Demand” what? Besides coming off sounding like Evita Peron, Michelle Obama has a very weird view of the art of politics which works by persuasion and not by compulsion.

That one registers a 8.5 on the Creepy-O-Meter.

I was talking to Rick last night and told him about what I find creepiest of all of Obama’s proposals.

The thing that creeps me out the most about Obama is his civilian national security force, which he proposed in this July 2 speech:

The WSJ has the transcript. Read it yourself (emphasis added)

Just as we must value and encourage military service across our society, we must honor and expand other opportunities to serve. Because the future of our nation depends on the soldier at Fort Carson, but it also depends on the teacher in East LA, the nurse in Appalachia, the after-school worker in New Orleans, the Peace Corps volunteer in Africa, and the Foreign Service officer in Indonesia. Americans have shown that they want to step up. But we’re not keeping pace with the demand of those who want to serve, or leveraging that commitment to meet national challenges. FDR not only enlisted Americans to create employment, he targeted that service to build our infrastructure and conserve our environment. JFK not only called on a new generation, he made their service a bridge to the developing world, and a bright light of American values in the darkest days of the Cold War.

Today, AmeriCorps – our nation’s network of local, state and national service programs – has 75,000 slots. I know firsthand the quality of these programs. My wife Michelle once left her job at a law firm to be the founding director of an AmeriCorps program in Chicago that trains young people for careers in public service. These programs invest Americans in their communities and their country. They tap America’s greatest resource – our citizens.

As President, I will expand AmeriCorps to 250,000 slots, and make that increased service a vehicle to meet national goals like providing health care and education, saving our planet and restoring our standing in the world, so that citizens see their efforts connected to a common purpose. People of all ages, stations, and skills will be asked to serve. Because when it comes to the challenges we face, the American people are not the problem – they are the answer.

We’ll send more college graduates to teach and mentor our young people. We’ll call on Americans to join an Energy Corps to conduct renewable energy and environmental cleanup projects in their neighborhoods. We’ll enlist veterans to help other vets find jobs and support, and to be there for our military families. And we’ll also grow our Foreign Service, open consulates that have been shuttered, and double the size of the Peace Corps by 2011 to renew our diplomacy. And we’ll use technology to connect people to service. We’ll expand USA Freedom Corps to create an online network where Americans can browse opportunities to volunteer. You’ll be able to search by category, time commitment, and skill sets; you’ll be able to rate service opportunities, build service networks, and create your own service pages to track your hours and activities. This will empower more Americans to craft their own service agenda, and make their own change from the bottom up.

CIVILIAN NATIONAL SECURITY FORCE
While Jim Lindgren is not worried that Obama is proposing some new paramilitary organization, I am. I am seriously worried that such a bureaucracy, once established, funded to the tune of an estimated $500 billion of our tax dollars, and employing, in Lindgren’s words,

the total number of members of Obama’s civilian national security force should range from about 2.1 to 2.7 million members and staff

will be used by Washington to dominate the population at large. Germany in the 1930s and early 1940s did it, the Soviets did, the Chinese are doing it, and so are the Cubans.

The US military is under civilian control. Who will be in control of the civilian national security force? The politicians?

The Comites de Defensa de la Revolucion are only ninety miles from the Keys, folks, they’re not a world away.

UPDATE
Sister Toldjah adds another one.