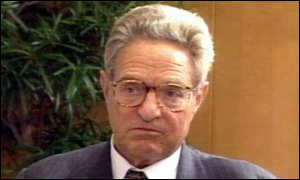 George Soros has been buying hundreds of thousands of acres of pampas land in South America. Back in the 1990s he bought over a million acres in Argentina.

His company, ADECOAGRO, raised cattle for beef during the mad cow disease scare, when England, the US and Canadian beef could not be sold in Europe.

In 2006 Argentina’s Federal Planning minister announced that Soros is investing “between 250 and 300 million dollars” to produce bio-fuel from corn and sugar cane in Santa Fe province, Argentina:

The project would employ “1,300 people directly and among 8 and 10 thousand people indirectly”, the minister considered, and anticipated a production of 200 million liters of bio-fuel. The Soros group was already involved in real estate investments in the country and then got to manage over 170 thousand hectares of country land in several Argentinean provinces. It has now strong investments in cattle, soy, corn, wheat, sunflower, and milk production. Though their bio-fuel interest has a background with the buying of an ethanol plant in Minas Gerais -Brazil-, they surely saw an opportunity in Argentina after the recent fuzz about the bio-fuel law declared by the government -approved in 2004 and re-approved in April with a different text-.

There was some political finagling involved,

This law sets tax deduction incentives for the production of bio-fuel, and makes mandatory for all liquid fuels from petrol to contain 5% of ethanol or bio-fuel. Though it might seem a positive initiative, the duplicate approval left a sour feel to it.

A third of Uruguay’s agricultural property may now be owned by foreigners, according to Uruguay’s Rural Association. They include farm companies PGG Wrightson Ltd. of New Zealand and Buenos Aires-based Adecoagro, which is backed by billionaire investor George Soros.

It is rather ironic that Soros, who bankrolls much of the most liberal branches of the Democrat party, is profiting from free trade and no tariffs on his products while Nancy Pelosi and the Democrat congress block the Colombia Free Trade agreement.

I talked about Soros in this morning’s 15 Minutes on Latin America.

UPDATE
The folks from ECrisis have a most jaundiced view of Soros.