The first one, from the Guardian (definitely not one organ of the vast right wing conspirators), Venezuela: Army unrest grows over Chávez reforms (emphasis added)

Venezuelan military officers have expressed growing alarm at attempts by President Hugo Chávez to turn the armed forces into a political instrument of his socialist revolution.

One general has been detained and hundreds of other officers reportedly sidelined for protesting against the ideological drive. Chavez has ordered the armed forces to adopt the Cuba-style salute “Fatherland, socialism or death” to put the institution at the heart of his effort to transform Venezuela.

Pastors from the recently formed pro-Chávez Reformed Catholic church have been installed as army chaplains to weaken the influence of the traditional Catholic church, which is hostile to the president. “That’s causing a lot of resentment, a lot of upset,” said a source close to the military.

The general was ordered to report to the military prosecutor’s office twice a month and to stay in Caracas but was not charged with any crime.

Before his detention he told the Associated Press that the new motto deprived “the right of every Venezuelan citizen to think differently and to disagree with socialism”.

According to Citizen Control for Security, a watchdog group, about 800 disgruntled officers have been left without formal duties. Many sit at home awaiting early retirement, it said.

I copied and pasted the article in its entirety. As regular readers of this blog know, I seldom cut and paste a whole article, but every word in that article needed to be read. Let’s bear in mind that retired military officers do make a difference in Venezuelan politics.

And now for a flashback:
Last March Hugo was threatening war with Colombia in reaction to the Colombian raid in Ecuador that killed the FARC’s #2 guy, Raul Reyes. Considering Colombia’s superior military might it came as no surprise that the Venezuelan army wasn’t exactly chomping at the bit to go to war.

It so happened that the Venezuelan army’s advance to the Colombian border got held up by a taxi drivers’ strike, an incident which the Guardian refers to as “unrelated” 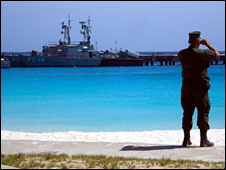 Fast-forward to last week’s Mercosur summit,
where Chavez was saying that the U.S. Navy’s decision to re-establish its Fourth Fleet is “a threat” to Latin America. Right before Mercosur Chavez even had the military do exercises, named Operation Socialist Fatherland,

a military exercise designed to show the strength of Venezuela’s combined forces.

Chavez returned from Mercosur, and soon after came the Colombians’ rescue of the FARC’s four most valuable hostages. Chavez claims he heard the news from a construction worker at one of the socialist cities.

The second independent item:
Along came the July 5th celebration of Venezuela’s Independence Day, where the military parade is also a “show of strength”, or so you would expect. Except that it was not; it was, again, something of a “comic opera”:
There was the overturned truck: the truck overturned while driving at a vertiginous parade speed of maybe 5 miles per hour. Then things really got smokin’: And some thing fell off the tank: The thing had to be dragged off the street.

To add to the hilarity of the celebration, this guy’s probably glad he wore a cup to the parade: Crotch-gazing aside, is the Venezuelan military sending Hugo a message?