On June 11 I translated a report by Patricia Poleo that stated that Venezuelans of Arab ancestry are being recruited under the auspices of Tarek el Ayssami, Venezuela’s vice-Minister of the Interior, for combat training in Hezbollah camps in South Lebanon.

Yesterday the US Treasury Department designated a Venezuelan diplomat as a Hezbollah supporter.

Noticias 24 from Caracas (in Spanish) states that a source at the Venezuelan chancellory verified that Nasr al Din is a Venezuelan diplomat based in Damascus. The Venezuelan government refused to issue an official statement “for the time being”.

The U.S. Department of the Treasury designated Nsr al Din and Fawzi Kan’an, along with two travel agencies owned and controlled by Kan’an, as terror supporters

Nasr al Din has counseled Hizballah donors on fundraising efforts and has provided donors with specific information on bank accounts where the donors’ deposits would go directly to Hizballah.

The Treasury Dept. statement lists 12 aliases for Nasr al Din, who was born on December 13, 1962 in Lebanon.

The Treasury Dept. identifies Fawzi Kan’an as a

a Venezuela-based Hizballah supporter and a significant provider of financial support to Hizballah. Kan’an has facilitated travel for Hizballah members and sent money raised in Venezuela to Hizballah officials in Lebanon.

Kan’an has met with senior Hizballah officials in Lebanon to discuss operational issues, including possible kidnappings and terrorist attacks. Further, Kan’an has also traveled with other Hizballah members to Iran for training.

The Treasury Department shows Kan’an as a naturalized Venezuelan citizen born in 1943. Kan’an owns and operates the Biblos Travel Agency, located in Caracas, which reportedly he uses to courier funds to Lebanon.

In Caracas, Noticias 24 reports that Kan’an denied the the U.S. accusations, said that his accounts in the US have not been frozen, and sstated that his Biblos and Hilal agencies closed a year ago. However, as you can read in the AP report, who interviewed Kan’an, he was at the “Hilal travel agency in Caracas, a street-level office with barred windows” itself. 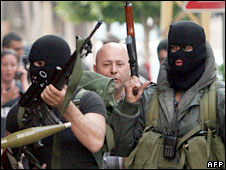 The US assets of both Kan’an and Nasr al Din have been frozen.

William Davila, candidate for governor for Merida, Venezuela, brought a complaint to the Venezuela Attorney General’s re: Hezbollah, which has remained ignored.

Why is this important:
As Efraim Karsh explained in his article, Islam’s Imperial Dreams (via Siggy)

As the 14th-century historian and philosopher Abdel Rahman ibn Khaldun wrote, “In the Muslim community, the jihad is a religious duty because of the universalism of the Islamic mission and the obligation [to convert] everybody to Islam either by persuasion or by force.”

The Venezuelan government is in bed with this scheme. As the Treasury Department stated,

“It is extremely troubling to see the Government of Venezuela employing and providing safe harbor to Hizballah facilitators and fundraisers. We will continue to expose the global nature of Hizballah’s terrorist support network, and we call on responsible governments worldwide to disrupt and dismantle this activity,” said Adam J. Szubin, Director of the Office of Foreign Assets Control (OFAC).

Bill Roggio is also posting on the story. Noticias 24 has a background article (in Spanish) on Hezbollah in Latin America.